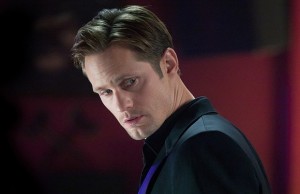 After nearly a year, True Blood has returned in all its bloody glory. With the last few season (and books for that matter) being sub par to say the least, my anticipation going into season five was not as high as years past. I decided to lower my expectations because I think we’ve been spoiled by some remarkable television over the last two years. True Blood is not Game of Throne, it’s not Breaking Bad, and it’s not even on par with the criminally undervalued Vampire Diaries. So viewers have to take the show for what it is, a bloody good time, no more no less. Season four’s finale left a lot of balls in the air, as True Blood usually does, and the premiere was able to give us answers rather quickly while also raising a ton of new ones. The image we were all left with last year was that of Sookie holding her best friend Tara’s dead body after Debbie blew the back of her head off. That appeared to be the last time that we would see Tara on the show, but not so fast. Having Tara come back as a vampire was one of the more interesting things the show has done in some time, and having Pam as her maker? How ironic. I have to admit I was a bit let down by the series seeming unwillingness to be daring and get rid of one of True Blood’s original main characters, but a vampire Tara should open the door for some interesting storylines. Hopefully this can be another excuse to inject more Pam into the show. (Fu*ktarded, classic Pam)

Then we have Eric and Bill. I really hope that the bromance between these two continues. After they killed Nan in last season’s finale, you just knew they’d be in some serious hot water and it got pretty hot for them in the premiere. After speed cleaning the scene of the crime, the authority immediately captured the former King and Sherriff and hauled them off for what was sure to be the true death but those plans were thwarted in part because of Eric’s “sister”, Nora. I use the term sister loosely because as Eric says, “We may fight like sibling, but we f**k like champions.” With this trio now being captured themselves, their punishment is something I look forward to being revealed. 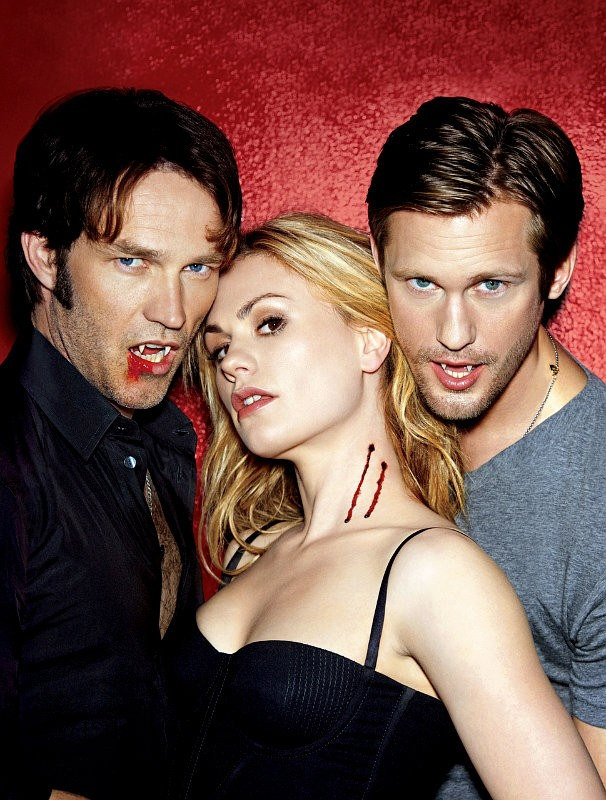 And speaking of bromance, I was hoping to see more Sam and Alcide together saving people and crushing throats. Sam comes face to face with Marcus’s pack after having a hand in his death last season. After some torturing, Sam finally brought them to Marcus’ body where Alcide showed up and copped to the murder himself. That scene is the reason that Sam and Alcide are two of my favorite characters. They barely know each other but still one would never sell the other out. One other awesome scene for Alcide came between him and Lafayette, because I believe it was their first interaction on the show, and it was not at all civil.

While there was some truly promising and good moments this episode, the premiere also had its fair share of eye rolling moments. Steve Newlins’ reappearance immediately comes to mind. Him as a vampire was hard enough to fathom (still don’t know how he became a vampire) but his declaration of love to Jason was just completely over the top and seemingly only for shock value. Although seeing Jessica in her Red Riding Hood outfit is wasn’t necessarily a bad thing. I hope that the “Hoyt, Jessica, and Jason” is resolved rather quickly, as the love triangle angle has not always been handled perfectly. Watching Jason and Jessica make googly eyes at each other is so last season.

Terry and Arlene are background characters at best, and them getting their own storyline involving Terry’s old war buddy Patrick is frustrating, as it seems like a waste of screen time. Interestingly enough, I still have not mentioned Sookie, the main character of True Blood by the way. Maybe this is a good thing that she was in the background this week, as the last few seasons have made her more and more unlikable. Her scene with Alcide demonstrated this best. Why not tell him that she killed Debbie? He knew Debbie hated her and was not the most stable person. I really hope this plot point is not drawn out.

While we got plenty of answers to the questions that last season’s finale left us with, we now have even more questions. Where is Jesus’ body? Why dig up Russell? Will Alcide tack over as Pack master? Where is that fairy Andy hooked up with? Maybe we’ll find out next week, but knowing the plodding pace that this show likes to move at, probably not.