Be prepared to experience an extremely trippy film here. Ben Wheatley’s follow up to the hilarious Sightseers takes an obscure turn, as it ventures into the mysterious and titular location; a grassy expanse encircled by a mass of hallucinogenic mushrooms. The film centres on Whitehead, a cowardly servant who dabbles in divination. After fleeing from battle, he comes across a group who eventually fall under command of Michael Smiley’s O’Neill. Using the mushrooms and other grim ways of persuasion, he commands the group to look for a hidden treasure.

Wheatley’s become a distinctive figure in the British film industry, with each of his productions taking care not to re-tread the same ground, and here he has chosen to explore the surreal interactions between his characters. Granted there isn’t much development with the secondary characters, but it’s more how they feed off each other as their trip gets worse. Then again, Smiley turns O’Neill into a nasty piece of work, and is simultaneously subtle and commanding with his sinister presence. Whitehead meanwhile has the strongest development, as he transforms from a submissive worshipper into a man willing to (literally) eat up hallucinogenic evils to save his fellow friends. 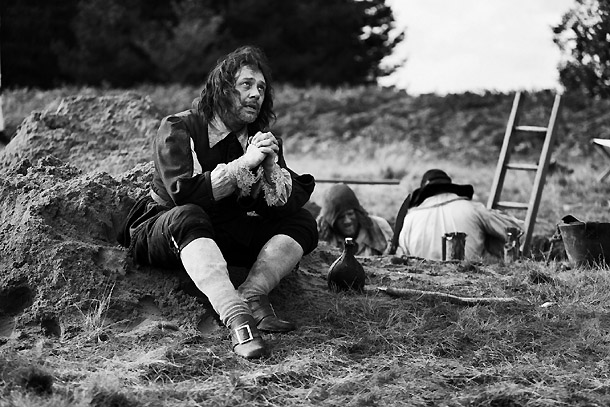 The film’s other strongest point is it’s beautiful and strange cinematography, which at times will divert its attentions from the small details, to the extremely abstract. This only gets worse as the treasure hunt creates conflict between our characters, to the point where one trip warps the viewer to a disorientating sequence of images. All of this enhances the almost psychedelic feel to the film, yet this could also be a weakness to some, as the film seems to be one that focuses more on dramatic experience and atmosphere, rather than any concrete story or development (especially in the last 30 minutes).

Despite the film’s abstract nature, it is definitely worth watching to nitpick at all the visual cues and performances; it’s a film that could be talked about for hours on end after your first viewing. Better yet, the film has gone on a simultaneous release, so theatres, online retailers and on demand sites are distributing it already, so there is no excuse to miss it!