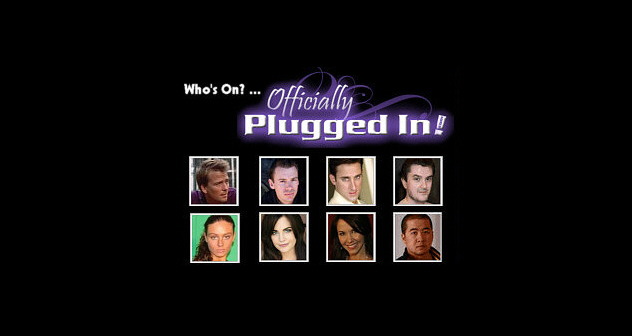 What is your Officially Plugged In site about?

Officially Plugged In is a website that I started to help keep fans safe from fake/poser social network profiles. Working with actor Sean Patrick Flanery‘s online presence, I ran into a problem with fans believing his Myspace wasn’t really his. There were several fan accounts that told people their accounts were real, when indeed they weren’t. I had Sean create a video and it was the proof fans needed to confirm they had the real account. We would have done a photo with his web address written on it, but I’ve found over time that people can photoshop photos easily to their own advantage. Videos were the best way to offer a visual verification.

How does your site help up and coming artists?

Everyone seems to think they need to be a top celebrity to be showcased with an intro video on Officially Plugged In, but they don’t. If a person is in the public eye often and has been in a film, performed music publicly, published a book, etc… and they have fans, then they should consider sending in an intro video. If a person is an upcoming artist, fans of Officially Plugged In tend to check out newly showcased people and their projects. I also have an online magazine section where I’ll try to highlight artist news and interviews.

Is your site very important to you?

This site is very important to me. I have a big heart and it’s sad when I hear people’s stories of deceit by false social accounts of who they thought was a celebrity talking to them. This type of problem can create dangerous situations, which is why I wrote up some story ideas on the site of meeting celebrities. In addition, these posers can make a bad impression for the real person they impersonate.

Do you enjoy helping various artists get their bearings?

What is your favorite part about helping them?

Basically just a satisfaction of sharing about their creations and projects to bring inspiration to others.

What is a favorite past time of yours?

I love spending time with my family. 🙂

If you could change one thing about your life, what would it be?

That’s a hard question to ponder, because I think everything happens for a reason. So if I changed something prior to this point, it could have a negative impact for where I’m at today. I guess then I wouldn’t change anything in the past. I would just strive to do positive things in the future and try not to care so much about the negative things that come along the way.

I’m going to strive to have more fun during this New Year.

How do you plan on achieving this Resolution?

I’m first working on simplifying things and then I’ll work on opportunities that will allow for the creation of fun moments.

Who can go to your site for help?

I’d say it’s best for people who have created and published something in one way or another. A writer publishes a book, a musician performs at a public venue, an actor is in a film that got some news published about it. If a person has fans they worry about keeping safe, then sending in an intro video to be showcased on Officially Plugged In is one step to help. On the flip side, it’s helpful for fans as well. They can go to the website and find people of talent who they know are real.

In some cases, a person doesn’t even need to have an official website to be showcased. As long as they have an official Twitter or place where they talk to fans, they can mention the web address for that official spot.

I used to list people for free, but it’s a lot of work to deal with the videos (downloading, adding credits, uploading) and then creating the showcase page with links to the official site, social networks and more. I also do a mini interview with each person and tend to keep it internet related.

People have told me that the site is a great idea and that I should charge to take care of the showcase pages, so I finally decided to charge a fair amount of $50 for set up of a page.

How long have you been running the site?

I’ve been running the website for about three years now. It’s something I work on in my spare time. I’d love to work on it more than I do, but I have other obligations that keep me from building it full
time.

Do you intend to keep it running for a long time?

I would love to keep it running for a long time. 🙂

What are your plans for the future.

That’s a loaded question! I want to spend time with loved ones and continue to do what I love online. I know that’s a broad answer, but I’m trying to look at the big picture. 🙂