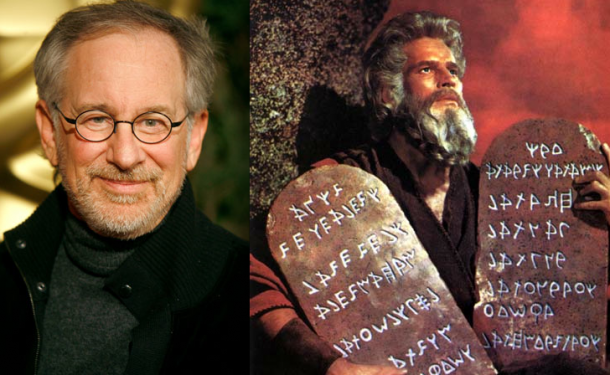 Deadline is reporting on Warner Bros’ aggressive courting of Steven Spielberg for their Moses epic, Gods and Kings. It would be a major coup for the studio: They’ve got several other talented directors such as Martin Scorsese, Christopher Nolan, Clint Eastwood, The Wachowski Siblings, and many others on their payroll, and they’ve garnered an amazing reputation for giving their directors immense amounts of freedom. Plus: it’s Steven freaking Spielberg.

Gods and Kings tells the life story of Moses, and is written by Michael Green and Stuart Hazeldine. It covers all the basics: basket down the river, burning bush, “Let My People Go!”, wandering in the desert. The epic scope and Jewish heroism is hoped to draw Spielberg in. If the man accepts, he’ll have to shoot it after he completes Lincoln and Robopocalypse in the spring and summer of 2012, respectively. Of course, for Warners, the Award winning film maker is worth the wait.

The studio insists the film isn’t a remake of The Ten Commandments, but comparisons to Cecile B. DeMille’s classic aren’t unwelcome. Commandments made the equivalent $1 Billion when adjusted for inflation, not to mention the cultural impact the film maintains to this day. If Gods and Kings can get a fraction of that success, Warner Bros will certainly be pleased.