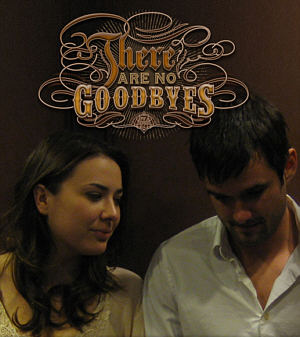 LYONS DEN PRODUCTIONS has just released the teaser trailer for their new feature film THERE ARE NO GOODBYES. The true indie production, which shot in Poland, Czech Republic, and Ireland last spring, finished rolling cameras in Pennsylvania on July 30 and is expected to premiere 2012. “There Are No Goodbyes” is a story about choices and finding purpose in one’s life in the context of the current sociopolitical climate of blue-collar America. The teaser trailer, which had its big screen debut at The 2011 Boonies International Film Festival, can now be viewed on the official website ThereAreNoGoodbyes.com , YouTube, Vimeo, Facebook, and other online outlets. Additionally, Lyons Den Productions announces the premiere of the full-length trailer at the Eerie Horror Film Festival & Expo, October 27-30, at the historic Warner Theatre.