Jeff Smith’s Bone is a staggering work of comic fantasy, something that is required reading as far as I’m concerned, right up there with Watchmen, Catcher in the Rye, and The Great Gatsby.* A film adaptation has been in development for practically a decade, and the Hollywood Reporter is bringing the exciting news that Bone may finally get the adaptation it deserves. 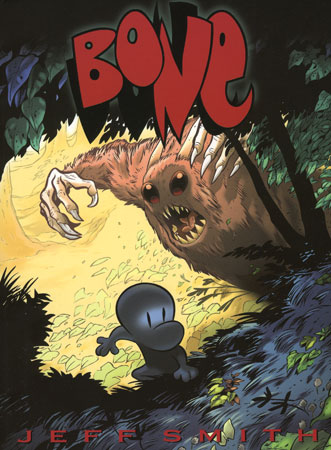 Animal Logic, the animation company that brought us the Happy Feet films, is slated to produce the film. P.J. Hogan, the director of the 2003 live action Peter Pan, is set to direct. Hogan’s Pan is probably my favorite adaptation of the character. It gets all the whimsy and wordplay of Barrie’s book so right, but it also tackles the weird sexual undertones and adult themes with grace and panache.** This ability to handle style and substance bodes well for Bone, a story that begins as comic fantasy and ends up exploring some pretty mature ideas.

The Bone story details three outcasts who discover a hidden valley and encounter rat creatures, dragons, and the evil Lord of the Locust. A war between good and evil ensues, and Smith weaves in comedy, adventure, emotion, and heart in equally effective doses.

This might be the best news I’ve hear all week.

**So, yeah, you should buy Peter Pan too.