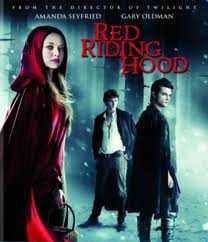 This movie is a dark version of the fable tale Little Red Riding Hood and it is rated PG-13.  The story takes place in a little village near the dark woods, where the people who live there are in constant fear of a werewolf plaguing their village. Soon they discover that the werewolf is attacking people again.

They call upon a werewolf hunter named Soloman (played by one of my favorite actor Gary Oldman). He had discovered that his own wife was a werewolf who he had to kill to protect his two daughters. Now he is dedicated to hunt other werewolves down. When Soloman finds out that one of the werewolves is a villager, he gets so determined to catch it and reveal it’s true identity before the blood moon.

Valerie (Amanda Seyfried) is caught up in a love triangle with two boys named Peter (Shiloh Fernandez) and Henry (Max Irons). She finds out that the werewolf wants her and then she starts not trusting people that she loves because any one of them could be the werewolf. Then she finds out a deep family secret that is hidden by her dad.

I really like this movie because it has a great cast, the story plot using the characters of the fable tale was good, and the special effects made me jump in some scenes. But I was disappointed with the image of the werewolf, because the werewolf was a big four legged rabid looking dog that had a tail.  I thought the werewolf would be more like a half human and half wolf creature. But I’m not telling who the werewolf is. If love dark and out-of-the ordinary movies like I do, then I suggest you rent this movie if you have not seen it yet.