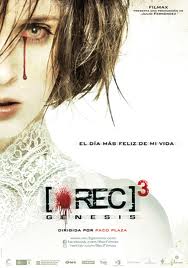 The ‘Rec‘ franchise has been a bit of fresh air when it comes to the found footage genre, as despite being mostly conventional it has been able to keep the format fresh with its unrelenting pace and exposed perspectives. The past two films depict a block of flats that has been quarantined to contain a mysterious infection, to then sweeping the building in its sequel with specialised forces, meeting some familiar characters on the way. A surprise then, to see that this new installment (one of a planned back to back set) is to depart and make a more staged approach with less use of handheld cameras. Yet at the same time, as the trailer displays, the film will still carry the same intensity but also add a new and open environment compared to the original confinements of a claustrophobic tower block. With this in mind, it will be interesting to see how this prequel will will connect with the mysteries from the first two films, as well as leave the plot open for its final segment, ‘Rec 4: Apocalypse’.

The real attraction however is its location, as establishing an outbreak within a wedding only invites complete chaos. Not only this, but it provides some nice visual touches, especially with the bride and groom (complete with a suit of shining armour) heading back to a wedding reception washed in sunlight and filled with dust, containing silhouettes of infected dotted around the venue. There seems to be more emotion present too, as the film deals with the couple becoming separated and finding a way to reunite amongst the outbreak. Released later this year, this is sure to be a frightening and intense addition to the series.