In the age of the mega-blockbuster, films like Pacific Rim and The Avengers get by on being big, colorful spectacles that are light on intelligence but big on explosions and a sense of fun. I enjoyed both of those films, and I’ve oohed and ahhed at the giant battles and felt the adrenaline rush like everyone else. I have no problems with those films making tons of money and capturing the imaginations of the movie-going public. Up until last night, I thought I was satisfied with what 3D pop cinema was offering. But last night, I saw Gravity. And now, everything is a little different.

I still have a fondness for those films, and I am nowhere near disowning them. But director Alfonso Cuarón, the auteur responsible for Children of Men and the third (and best) Harry Potter film, has produced a cinematic experience that must be seen to be believed, preferably in IMAX 3D. The sweeping vistas of Earth and its surrounding space stations bring to mind images from Lawrence of Arabia or Gone With The Wind. To be honest, Gravity will feel like any other well constructed movie when viewed on your TV set at home, but in the great cathedral that is the cinema, Gravity shines as bright as the big screen epics of the 30s, 40s, and 50s. This is a Big Movie playing with Big Ideas, and it is all masterfully woven together by Cuarón’s vision.

He is aided by Sandra Bullock and George Clooney, two major stars turning in fantastic work as a pair of astronauts dealing with a horrible situation. The film is essentially a twofer, Bullock and Clooney are the only human beings we see during the film’s runtime, and the pair have a natural chemistry that helps elevates Gravity a few notches. As I watch more and more movies, I can’t help but note that there’s two types of actors: those who play their role as scripted, who execute their commands with efficiency, and then there are those who elevate, who add something to the part as written and give something more to the work. Johny Depp elevates. Robert Downey Jr elevates. And here, Clooney and Bullock elevate.

Cuarón elevates the material simply by shooting his space survival story in his now trademark style: long takes, swooping crane shots, and seamless CGI. Looking at set photos of Clooney and Bullock, I was astonished to see that even their NASA space suits were computer generated most of the time. Cuarón has always had tremendous skill in these departments, and Gravity might be his masterpiece. He knows just the right moment to push in on our hero’s faces, and when to pull out and let them shrink in the vacuum of space. This is the best 3D cinematography I’ve seen. Period. It envelopes you, so that you are right there with Bullock and Clooney as they desperately scramble for anything to hold on to so they can get back to the big blue marble that taunts them with how close and yet far away it is.

With the 3D photography and stunning visuals, Gravity is similar to Pacific Rim or Avengers, but what sets it apart is the journey Bullock’s character goes through, a journey that I wouldn’t dare spoil for anyone, so I will tread lightly here. Suffice it to say, Bullock has never been more vulnerable. She is emotionally naked in ways that startle you just as her physically careening in space startles you. I’m sure she worked her ass off in the part, but she makes it seem effortless and easy, so much so that I can’t imagine any other actress taking home the Best Actress statue at next year’s Oscar ceremony. This is career defining work for her, a performance so brave and true that it will be remembered for many years to come.

But the best thing about Gravity is that it’s a big budget film for adults. Usually it goes the bigger the budget the dumber the script, that way you can get as many people in the theater as possible and not alienate anyone. Here’s a film with spectacular effects and major stars and intelligent, complex themes throughout. It’s a huge, expensive risk that’s practically unheard of in this day and age. This is a film you can chew on, filled with symbolism and smarts as well as thrills and catharsis. Gravity is everything movies were, and everything they’re supposed to be. I simply can’t imagine anyone who claims to love movies won’t love Gravity. 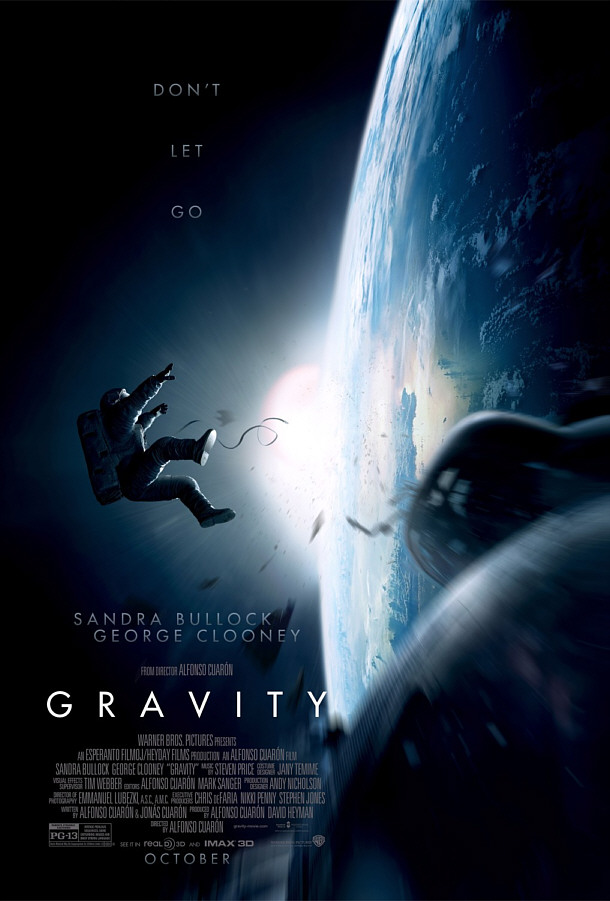