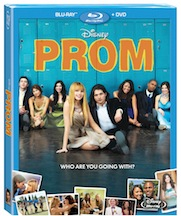 The major rule of thumb when it comes to reviewing a film is asking yourself two questions. The first is: What is this movie trying to accomplish? and the second is: Does it succeed on these terms? It would be easy to knock Disney’s PROM for not depicting a realistic view of high school, or the contemporary idea of a prom. There’s no drinking before the dance, no hotel after parties, and no allusion to sex at all here. This is a straight and narrow PG film, the kind of squeaky clean family films the studio produced in the 60s and 70s. Cheap shots could be taken here, but they’d be just that: cheap.

There’s a weird charm that comes from the romanticized version of high school on display, mostly because director Joe Nussbaum and writer Katie Wech try to make this feel as genuine as possible without getting their hands dirty. The young talent involved give solid performances, and they seem to be in on the idea that they’re peddling a fairy tale of sorts to tween girls who have no idea what high school will truly have in store for them.

The final result is an odd, slightly charming mixture of John Hughes and the Disney trifecta of Snow White, Sleeping Beauty, and Cinderella. The film’s multiple love stories are cute and non threatening, with enough minor complexity to keep adults slightly involved while watching with their younger children.

And let’s not kid ourselves, Disney is bent on aiming this at all four quadrants, and they succeed here, supplying a family friendly romantic comedy that allows youngsters to look forward to prom with naivete while their parents look back on theirs with rose tinted glasses.

The BluRay and DVD come bundled together, and the special features are amusing enough, and probably work best as a dessert of sorts after the main feature for young girls at a sleepover. There are an absurd number of music videos, a blooper reel, and a short film to sift through. The picture and sound quality are spectacular. The Mouse House crafts the finest DVDs and BluRays in town, so this is really no surprise. Even their minor films receive the star studded treatment.

So, is PROM a minor film, or will it catch fire with kids and become a sleeper classic? Its hard to tell at this stage in the game, but with so many young faces in the cast who’ll surely go on to bigger things, this may be a seminal film for a young generation. Only time will tell, but when it comes to family entertainment, you could do much worse than PROM. It knows exactly what kind of movie it wants to be, and it succeeds on its own terms.