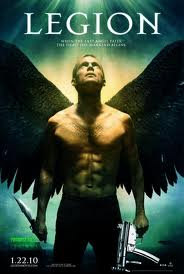 Have you ever looked forward to a movie or stumbled across one and despite a great premise or cast has you leaving the theater going “That movie could have been SO much better! ”

I had that same feeling after seeing a small horror film on cable called “Legion“. I had followed the casting and making of stories in the bible of Fanboy’s everywhere, Fangoria. I recall reading how they got Dennis Quaid, Tyrese and Paul Bettany is the cast and thinking “That’s a lot heavy talent for smaller budgeted horror film”.

Now there is a golden rule in horror films…..the bigger the studio and the more “star power” you have, the less scary the film will be. Think about it for a second….in the very first movie, no one was really known except for maybe Betsy Palmer and look how it well it did. Then you get something like “End of Days” with Arnold and Gabriel Byrne and a 100 million budget….and it’s a pile of crap.

I caught the previews of “Legion” on TV and the movie looked pretty good looking. The reviews were somewhat mixed and I didn’t know a soul who had actually seen it. Soon, it faded from the spotlight and I forgot about it.

But recently it started playing on Starz, a cable network, and so I decided to to catch it. Before I did, I looked at the cast online and was even more impressed. Besides the 3 stars I mentioned before, the cast also included the lovely Kate Walsh, rising star Lucas Black, fanboy fave Doug Jones and Charles Dutton!

So while I was a wee bit bit nervous with all this talent, this was a small budget film (26 million) and the first studio film directed by Scott Stewart. This looked to be a very cool ride…

Legion’s plot is that God is tired of the human race and wants to end it. But if a child is born, in that child lies the salvation of Mankind. God doesn’t want this so he sends his angels to turn humans into demonic beings and kill the unborn child. One angel, Michael, played by Bettany, rebels and leaves Heaven to save it.

The unborn child just happens to be carried by a young waitress who works at Paradise Falls (subtle,it isn’t). The cast starts to gather at the diner and weird things begin to happen and pretty soon Bettany shows up to explain what is going on. And while we find out God is upset at the human race, the film fails to address why. He doesn’t just end the world or how a human baby can save it….two pretty big plot questions left unanswered.

After fighting off hordes of demon angels and losing several key cast members, the big baddie shows up and while Bettany is tangling with him, suddenly tells Black’s character to “find the prophets, learn the instructions”…again, way out of left field. If that was so important, then why sit in a diner surrounded by demons instead of taking off and trying to find a better place to defend ones self?

This is what I mean by having a good cast and a very uneven script. The movie changes midstream and leaves the viewer without any paddle and walking from the theater shaking his/her head.