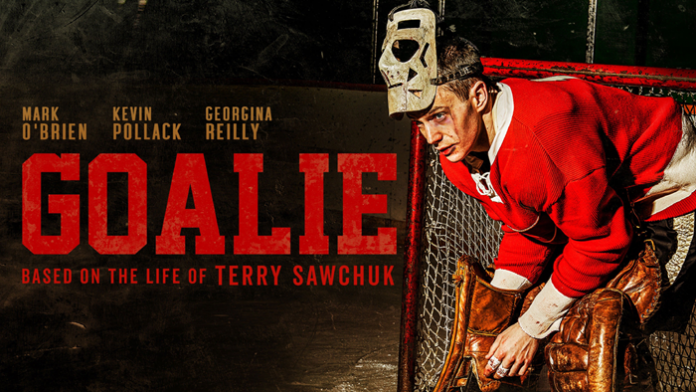 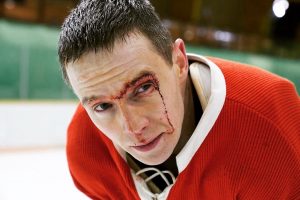 In her new film Goalie director/co-writer Adriana Maggs shows just how messy life can be when reality shadows our dreams. Based on the true story of hockey player Terry Sawchuk Goalie is a gritty, dark and honest look into life both on and off the ice for the legendary goaltender. Back in the days before facemasks Terry amassed an astounding 400 stitches on his face throughout his 21 seasons (1949-1970). Not to mention the countless bruises and numerous internal injuries he sustained throughout his career from fighting with a puck. Ironically, it was a different kind of fight that ultimately took Terry’s life. And that is how this story begins with Terry’s untimely end.

Co-writers Adriana and her sister Jane were inspired to write Goalie based off of a book written by their father, Randall Maggs, called “Night Work: The Sawchuk Poems”. Randall has an interesting insight into the world of hockey since his brother is retired NHL player Darryl Maggs. So I think it’s safe to say that if anyone can tell a realistic hockey story it would be the Maggs family. This isn’t your average ‘underdog takes on the world’ sports film. There are many aspects of that theme within the film, but this story tackles both the highs and lows of Terry’s life. Family dysfunction. Loss. Injuries. Addiction. Self doubt. Depression. And the constant struggle with the internal battle that every athlete faces: Am I good enough?

Mark O’Brien shines as Terry with an incredibly layered performance. He isn’t afraid to shy away from the darkness lying under the surface of Terry’s past, present and future. On the ice Terry is a true hockey hero and one of the games finest players. But, off the ice cracks start forming as depression and addiction creep into his life. Outside of hockey Terry is lucky to find love with a woman who can both celebrate him in victory and carry him in defeat. Terry’s wife Pat is brilliantly played by Mark’s wife Georgina Reilly. I didn’t realize that the actors were married in real life before I watched the film. Now it makes sense how their love shines through the screen. Even in the dark moments of the story you can truly feel their love for each other. And you root for them through and through. Even when things spiral out of control there’s still a glimmer of hope that Terry can once again find his footing.

Kevin Pollak plays Jack Adams the man who both makes and breaks Terry. From the very moment they meet Terry unknowingly begins his slow decent into misery. Theirs is a complicated relationship. However, Kevin brings a unique compassion to “Trader Jack” that another actor may have missed. He allows us to see Jack struggling with his decisions as he manages the team. It makes you wonder how Terry’s life would have turned out had he not met Jack. Or, was he always destined for the goal? For someone who had a career record of 103 shutouts (now second on the NHL all-time record leader board) I would hope that Terry would have still chosen the ice. Granted his life didn’t turn out exactly how he had dreamed it would, but one thing is for certain, Terry brought a passion and drive to the game that is truly unparalleled.

*Goalie will be in select US theaters beginning January 31st and February 6th, and then it will be available on DVD/Digital on February 25th from Dark Star Pictures.