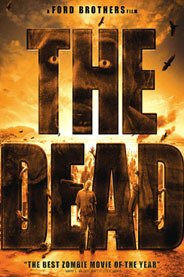 I wrote an article called “The Best Thirteen Weirdest Zombie Movies” a few months ago and this movie (The Dead) was #11 on my list.  I didn’t have a dialogue to go with it, so I decided to write a movie review.

The Dead takes place in West Africa. A military engineer, Lt. Brian Murphy (Rob Freeman), finds himself surviving in a land of zombies after his plane crashed.  He meets up with Sgt. Daniel Dembele (Prince David Oseia), who is looking for his son. Together they set off on a journey to find other survivors and a way to get out of the nightmarish hell.  I’m not going to go into much detail.  This movie was filmed on 35mm by an award-winning Ford brother and shot in locations of Burkina Faso, French-speaking West Africa, Ghana, and also in the Sahana Desert.

To me I felt that I was watching a documentary on how to survive a zombie outbreak, as I found this movie filled with lots of emotions from both characters.  It made me think about what I would do in the situations they faced.  This movie contains a lot of violence, so its not for the sensitive.  If you like unique international films, then this one is for you. Check it out on DVD.