It was my first full day in San Diego for the 2012 San Diego Comic Con and I was already mostly running off of caffeine.  When I got to the press room for Crave, I barely had a clue what the movie was about.  Besides the website and trailer for the film, I was going in blind.  But sometimes, that’s the best way to conduct an interview!

I met up with Charles de Lauzirika (HBO First Look: Prometheus) and Josh Lawson (House Of Lies) to talk about the film, which along with Dave Parker’s Coldwater and the Jamie Bradshaw/Aleksandr Dulerayn directed distopian thriller Branded, were set to be featured in The Virtual Drive-In panel in Hall H later that day.

You have a history in documentary filmmaking, is Crave your first foray into the feature length narrative? 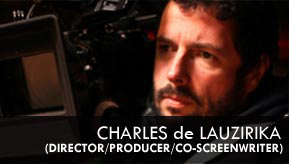 Given that your film’s main character is a photographer and you come from the documentary world, is there a correlation between you as the filmmaker and Aiden in the film?

Charles – Oh absolutely.  Some directors resort to documentary style filmmaking, I think, to imbue the film with an instant realism and others are trying to create an energy that they try to build on scene by scene.  In our case, it really is in a way documentary filmmaking because we were running so fast with a tight schedule.  It was almost like we had to stylishly capture the images in a way where it looked like it was a part of our visual intention.  On the other hand, we had to run and gun and move so fast that were using the documentary style of shooting with a lot of the scenes.

That being said, is this sort of where the idea for Crave came from: your experiences as a filmmaker translating to Aiden’s character as a photographer?  Upon viewing the trailer, it seems all these images he captures behind the camera ultimately screws with his head.

Charles – Well I’m glad you got that from the trailer because he has seen so much horror and ugliness, you know? It was kind of like Aiden’s character has been so damaged by what he’s seen that he retreats into this fantasy world.  Now I have not seen horrors of that magnitude.  I have not seen a dead body or blood and guts and things like that, but I feel like sometimes I embrace a fantasy world.  Even though I know it’s fantasy and don’t believe it’s happening, I use it as sort of an emotional cushion in a way.  Not in the degree that Aiden does in the film, however there’s a lot in the script that I think I added in terms of his voice over, which you hear some of in the trailer where he’s having conversations not just with himself but with God…also we have him talking to Bill Gates in the film.  He has these really weird random conversations with people and occasionally I’ll do that.  I’ll be driving and will think about the meeting I’m about to go into, there will be some arguing and I’ll end up rehearsing the meeting right there.  Aiden does that.  Or I’ll think back on how it could have gone better, how I could have done that better and revisit that argument or that conversation and I’ll redo the lines in my head.

And this would probably drive you mad in the process.

Charles – And Aiden has a lot of that in him which is why sometimes he gets a little bit lost and some of his decisions aren’t the best because he’s kind of in this dream logic that’s going on in his head.

So how did the idea come about?

Charles – Well basically, I was looking to make a manageably low budget first feature since I was 7 years old.  Like this was a long time coming and I finally got the opportunity both in terms of schedule and resources.  I was just looking for an idea and I had become attached to this much bigger science fiction project which has a much bigger budget and it was conveyed to me that maybe I should make something smaller first.  Kind of, you know, do a little test run.  So my former neighbor Rob Lawton pitched this idea to me, which was Travis Bickle meets Walter Mitty.  They’re actually remaking Walter Mitty right now with Ben Stiller so we’re just in time.  We’re going to beat them to the punch!  Basically it’s about this kind of fractured, cracked psychopath mixed with a guy who’s sort of lost within this fantasy world.  You bring those two together and you have a very interesting character.  And that’s who Aiden is that Josh plays.

So Josh, I love your character on House Of Lies.  Is it difficult coming from primarily comedies to a dark movie such as Crave? 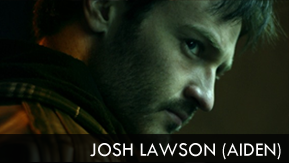 Josh Lawson –  It’s more difficult you know.  For Charlie to cast me after only seeing me do comedy…it’s not really hard for an actor, for the most part, to go from comedy to do…man I hate the word but for purposes of this interview…to go from comedy to drama.  It is difficult for comedians to get those darker roles because it’s hard for directors to envision them in that way.

But is it about comedic timing that helps with tackling drama or horror?

Josh – It’s about truth.  It’s about the understanding of character.  And so, when Charlie and I first sat down with each other in Detroit, he told about the character and who he is, his journey and his story.  These have got to be the pitfalls and these are going to be the hurdles, and here’s what we have to get across to the audience, you know?  This is what we want the audience to feel.  And then that was my job there, you know – to figure out how I’m going to get people to feel this, how I’m going to tell the story as best I can.  Who is this character and how am I going to portray this character as simply and sufficiently as I can.  Two things really help with any role, be it comedy or drama.  One, is a good script for obvious reasons because you know, you just don’t have to do as much heavy lifting.  The other, is a good director.  When you’re out at sea, and every production is kind of a tumultuous perfect storm in a way, you need a Captain. You need to trust someone, that you’re going in the right direction.  Otherwise, you just assume you’re on The Titanic and it’s only a matter of time before you hit an iceberg.  So thankfully, we had a good script.  I probably wouldn’t have auditioned if it wasn’t a good script.  And then with Charlie, I knew I had a good Captain.  So I felt the trust and a sense of calm while going through the project.

Josh – Yeah, completely.  Of course.  But I think every production is in its own way, a leaky boat.

The ones with the limited resources or budget,  with the “run and gun” schedules, more times than not, I’ve found to be more interesting.

Charles – I try to embrace all the happy accidents that come along.  I’ve seen other directors so previsit a movie up to the point where they know the exact frame count of the shot, the angle of the camera, the dolly and they know every other thing.  You know, they’d know that the dolly shot they want, they’d need to remove that fire hydrant out of the way.  They know these thing.  Personally, I’m fascinated by that kind of filmmaking, that kind of precision.  I think it’s great people can strive for that and then pull it off.  I feel like for me, if I had prevised or done storyboards to that degree, I would have lost that energy.  You know, that kind of happy accident energy where reality gives you gifts you might misread as a terrible terrible blow to the production where it’s a major problem and you think, “Oh my God, what are we going to do?” Where as, it might actually be a present where you can unwrap it and think this is something I would have never considered and it’s a whole new thing now.  Crave is filled with that.  This is probably a story I’m going to tell a million times now, but we have Ron Perlman in the film.  On his last day of shooting, he showed up and had hurt his head.  He had like a gash in his head.  He hit his head and I look at him and almost faint.  I’m thinking like, you just bought a brand new ferarri and the next day you go out and someone keyed it!  Ron said…he basically comes to me in the morning and says, “So Charlie, here’s how it’s going to go down. Pete is down with the Rastafarians.” I’m like, “Okay, Ron.  I don’t know what that means.”

Josh – How hard did you hit your head?

Charles -Exactly.  And then he said, “I want one of those black, red and green Rasta beanies.  I’m going to wear that to cover up the gash in my head.”  At that point, I thought that was one of those happy accidents where you could freak out and say you’ll have to digitally paint out the cut in his head or something.  But no, Ron came with the idea of the Rasta beanie and suddenly you’re going to see this movie and this character has this new dimension to him.  You’re going to wonder why he has that but then realize his character has a life off screen.  And for whatever reason, he’s down with the Rastafarians.

The trailer for Crave mentions the concept of people either being a “good wolf” or a “bad wolf”.  Which one do you think you are?

So basically it’s dark and light? You’ve got Darth Vader and Luke Skywalker in you?

Josh – You can’t deny it that Aiden’s bad wolf, I think, is the wolf he favors more.

Josh – And maybe that’s part of what this film is.  It’s watching somebody, for whatever reason, feed the darker side of himself.  You know, what happens to a person when they give into the darkness more than the light.  How far down can they go?

Are there plans for a theatrical release?

Charles – We don’t have a proper release date because this is like Day 1.  We’re going to start festivals.

Oh, so you don’t have distribution yet?

Charles -No.  We’re having our world premiere at Fantasia Fest in Montreal.  Then we’re going to, you know, be selling the movie from this point on.  We just finished it and now we’re going to go out with it and see what happens.  I’ve gotten plenty of interest, it’s just about making the deal.

From San Diego Comic Con to The Fantasia Film Fest where it premieres on July 24th, I have high hopes that Crave will find its place.  My interest has definitely been piqued and I look forward to viewing the film soon.

For more information about the film, check out the movie’s Official Website as well as their Facebook Page.