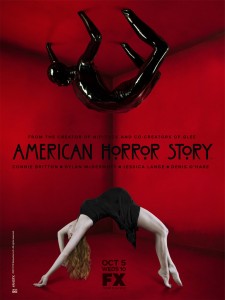 I was thinking a while back, when shows such as Once Upon A Time and Grimm were announced, if we’re going to turn a new leaf, going for a softer side as far as entertainment is concerned, perhaps in response to all the zombie/vampire shows that have taken over lately.

And then I watched American Horror Story and my mind was put at ease. True, entertaining psychological horror still exists and us, fans of the genre are not forgotten among fairy tales and undead people. Don’t get me wrong, the ration of dead(undead) person to living person is quite high, however I was getting a little bored with watching vamps making sweet love to ingenue girls who have nothing better to do than die in their prime in order to stay young forever.

I wanted something that would make me gasp rather than gush when I was watching and this confusing, terrorising show that is a mix between Amityville Horror and Rose Red is perfect on that account.

Dylan McDermott shines as Ben Harmon, the house owner who thought buying the „Murder House” was a good idea since he wanted to have a fresh start with his then upset wife – Vivien (Connie Britton ). Because nothing spells good fortune as the house where a couple recently offed themselves.

The moment „Murder House” is said you know you’re in for a treat. And what a treat it is. Every episode presents another time frame in the house’s history, letting you know that the recently demised couple that had previously owned the house is not the only pair that might still roam the walls.

Each generation of inhabitants has brought along at least one new ghost and not all of them like to play nice. The question is, who will join them from our current owners? The young and obviously disturbed daughter of Ben and Vivien, Violet (Taissa Farmiga)? Her equally disturbed parents? Anyone else that comes in contact with them or sets foot inside the house? Only the finale will tell and I honestly can say that I can’t wait for it.

In between all the confusion and misery that stems from living in the obviously charged environment (and having to share your house with ghosts you aren’t even aware of), actors such as Jessica Lange shine at adding a new layer to the ever-present terror levels. When you first meet her character you can’t help but hate her, but this is Jessica Lange and she wouldn’t be who she is if she couldn’t create a character you’ll love to hate. There is just something in the way Constance (Lange) defends her daughter, played by Jamie Brewer that makes your heart melt a little, even if the rest of the time you want to club her over the head with a shovel.

The cast is joined by Evan Peters, of the Kick-Ass and various Disney shows fame, in a role as far removed from them as Pluto is from the Sun. He plays Tate, a confused teenager who becomes infatuated with Violet to an almost psychotic level. And like the rest of the cast, he does so marvelously. Add to that great visuals, storytelling and a wonderful set and you have it all.

Every character adds to the level of controversy the show brings and you will surely find one that you can relate to, dead or undead, even if you don’t find the story creepy or violent enough for your tastes (which I doubt). Without giving to much away I’ll end this with a heartfelt recommendation to tune in each Wednesday on FX and please, don’t bring your children. There is a reason it gets a mature audiences rating.