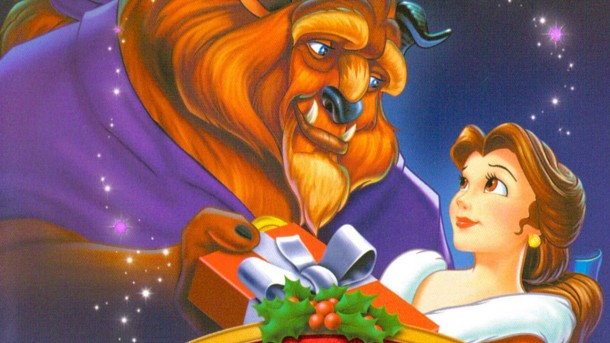 The 90s were a weird time for Walt Disney Animation Studios. The studio had finally gotten their credibility back with The Little Mermaid, Aladdin, and The Lion King. But these films were costly to make, and to help with cash flow Disney flooded the market with home video versions of their classics Snow White, Cinderella. and the like. When those classics ran out the studio decided to experiment with straight to DVD sequels, the first of which being The Return of Jafar. Return made nearly #200 million in video sales alone, and next up was a companion to Beauty and the Beast, their 1991 feature that was nominated for Best Picture.

So the studio was putting out high quality features and straight to DVD schlock at the same time, resulting in a weird public image, one that the company is just now recovering from. Disney has seemed to make peace with their 90s past, so its odd to see them put out Enchanted Christmas and Belle’s Magical World.

Neither film could possibly match the original Beauty and the Beast, so I can’t knock points off the films for failing to live up to their predecessor. And it helps that one of these sequels is vastly superior to the other. 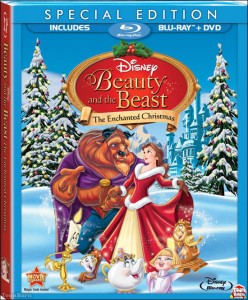 The superior sequel is Enchanted Christmas, which tries mighty hard to be about something, and to further explore the characters we all know and love. The problem is the choice to set the film during the first, when the Beast is still a Beast and the castle’s servants are still household appliances. Unlike Return of Jafar or Lion King II: Simba’s Pride, which took the characters to new places and expanded the story, this midquel just underlines points we already know from the first movie.

The film does some interesting things with setting the Beast’s tragic night during Christmas, and using Forte, a servant who prefers his new form, as a villain (and to be honest Tim Curry as Forte is the best thing about this movie), but it never takes these things anywhere meaningful. It just treads familiar ground, and it does it fairly well. For adults in the audience, this feature will be a bore. But if your kids loved the characters from the original, they’ll love this one too. 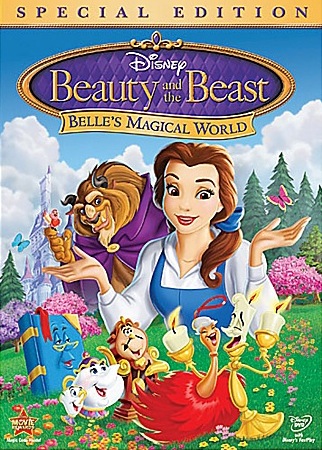 What I can’t imagine anyone loving is Belle’s Magical World, a film that is also set during Belle’s time at the castle pre-spell breaking that is merely a series of vignettes about sharing, learning, and caring that is just awful. The film bores and condescends to children, removing anything that was fun or exciting from the first two movies. The songs are unmemorable and tedious. The worst thing is the running time: at 92 minutes, its twenty minutes longer than Enchanted Christmas, and just a few minutes shy of the original. That’s a lot of time to fill, and the movie has nothing if interest to fill it with.

Enchanted Christmas isn’t incredibly memorable (there’s a reason it isn’t a frequent programmer on ABC Family’s 25 Days of Christmas) but it will entertain your little ones for an hour or so, and its pretty harmless fun time spent with characters they like already. Belle’s Magical World will suck the fun right out of it for them, and it will probably never be watched again.

I expressed confusion as to why Disney was releasing these films, and to be honest the obvious answer is most likely the correct one: its Christmas time, and if your little girl sees Enchanted Christmas she’ll be interested in seeing the 3D re-release of Beauty and the Beast next month. There are worse things to give your kids for Christmas this year, but there are also better things out there too.

You can order Beauty and the Beast: The Enchanted Christmas here.