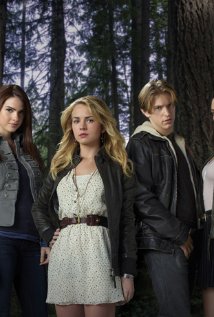 There’s a new TV series premiering on the CW on Thurs. Sept. 15 9/8 C. right after The Vampire Diaries. It’s called The Secret Circle which is based on the series of books written by author L.J. Smith, who also wrote The Vampire Diaries book series.

It is about a sixteen year old girl named Cassie Blake (Brittany Robertson) who moves with her mother from California to New Salem. She’s in a new town at a new high school where she meets some new friends; Adam Conant (Thomas Dekker), Diana Meade (Shelley Henning), Faye Chamberlain (Phoebe Tonkin). She finds out that everyone in the high school including herself are real witches. Faye becomes Cassie’s enemy and wants Diana’s place as the leader of the circle. Cassie and Diana are best friends and they both share the same love interest in Adam.