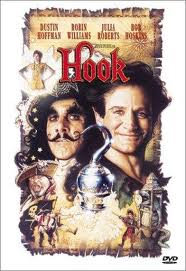 A few nights back I mused: Every once in a while I have to remind myself not to look down on “Goonies” fans, because I am a massive fan of “Hook.” The response on Twitter was huge, with a lot of folks jumping to the flick’s defense, and it got me thinking about that phrase, “One man’s junk is another man’s treasure.” So with that in mind I’m inspired to start this column; You’ve Got It All Wrong. I don’t know if this will be weekly, monthly, or if it’ll be on any schedule at all, but I do know it’ll be about taking down-trodden films and lifting them up a notch. And what better to kick it off then with Spielberg’s Hook?

In the 1980s, Spielberg was becoming marked as a popcorn artiste, making enjoyable but “shallow” entertainment. Jaws and Raiders of the Lost Ark were praised to high heaven, but they were still seen as nothing more then genre exercises. Spielberg was often nominated for awards, but never won any. Tired of always being the bridesmaid but never the bride, Spielberg made attempts to branch out and grow as a director. He tried in vain to create Oscar caliber films such as The Color Purple and Empire of the Sun. Both of those works are solid films, particularly Sun, but Spielberg seemed lost, and his trademark sense of wonder that audiences loved no longer came through.

Hook marked Spielberg’s attempt to mesh the fantasy elements of Close Encounter and Raiders with the serious tone of Purple and Sun. The film was meant to be a hybrid of sorts: the thinking man’s popcorn film. Screenwriter James Hart wrote the film as a response to his son asking him one night at dinner: “Dad, did Peter Pan ever grow up?” Hart fashioned a modern day take on the Pan story, with Peter leaving Neverland and growing up, becoming a lawyer, and marrying Wendy’s granddaughter Moira. Together they have a son, Jack, and a daughter Maggie. But Peter forgets where he comes from, and, like the elder Dr Jones and Encounters’ Roy Neary, gets wrapped up in something other then his family. In his case it’s his law firm. Never seen without his beeper or cellular telephone, Peter takes calls during his daughter’s school play and misses his son’s baseball games for morning meetings.

During a visit to London the adults go out to the banquet in honor of Granny Wendy, and Captain Hook comes to the real world to kidnap Jack and Maggie. Hook leaves a note for Peter, challenging him to return to Neverland and get his kids back. Tinkerbell soon arrives on the scene. She leads Peter to Neverland, beginning the long and painful process of restoring Peter’s abilities so he can rescue his children.

The film can be seen as a Spielberg’s reaction to what many men must attempt to achieve: a balance of the roles as a businessman, a husband, and a father. Spielberg grew up with a workaholic father, claiming in an interview that sometimes “I would miss him to the point of resenting him.” The last thing he wanted was for his own son Max to feel the same towards him. But being a mega-film maker is a full time job, and it wasn’t long before Spielberg found himself becoming just like his father, right down to only seeing his son on weekends. If anything, Hook represents Spielberg’s movement towards being a better father as well as a better filmmaker.

Common arguments against Hook are the overlarge sets that look more like a soundstage then a real place, and that Robin Williams, Dustin Hoffman, and Julia Roberts are all miscast as Peter, Hook, and Tink. To the latter, I say phooey. Say what you will about his recent output, Williams is a fantastic actor when pushed, and Spielberg utilizes his talents well here. Hoffman is delivering a perfectly campy performance, and Roberts may be a bit chilly, but that’s simply a byproduct of the chilly relationship she and Spielberg shared on set.

That behind the scenes knowledge helps excuse the overlarge sets as well. Hook was originally going to be a musical, and it was designed to have an Old Hollywood feel to it. When the music side was dropped (the only remaining song is “When Your Alone,” sung by Maggie two thirds through the film) it was too late to revamp the construction of the sets and the film’s design, but it still works for the final product very well.

The musical influences can still be heard in John Williams’ score, which his last great work. It’s arguable that his themes for Harry Potter were ripped and jiggered out of Hook‘s, and while the main theme for Jurassic Park is famous, Hook has a score that’s a pleasure to listen to from beginning to end without any accompaniment.

But matched with Spielberg’s flair for cinematography and his ability to weave magic out of every day items, Hook is a genuine pleasure to watch. The Pan story is one Spielberg was born to tell, and while it would have been cool to see the original story through his eyes (although the 2003 Peter Pan does a great job all on its own) this is a welcome sequel that should be anything but.

The best thing to come out of Hook is Spielberg realizing his limits. From this point forward the director adopted a “one for them, one for me” attitude, one he maintains to this day. Every few summers we get a Spielberg pop-entertainment, and that winter he brings us an Oscar contender. 1993 gave us Jurassic Park and Schindler’s List. 1997 brought The Lost World and then Amistad. In 2002 there was Minority Report followed by Catch Me if You Can. And 2005 delivered War of the Worlds and Munich. This December we’ll get two Spielberg films just a week apart: Tin Tin as the crowd pleaser and War Horse as the critic pleaser. Hook is often seen as one of Spielberg’s greatest failures, but it isn’t. It’s a smart film, a daring film, and it showed it’s director the right way to go about the rest of his career. In that way, it might be one of his most important works.

Wanna check it out? You can order Hook on DVD right here.

If you have a suggestion for a future You’ve Got It All Wrong, leave a comment, e-mail me, or Tweet me your idea!