Californian York Shackleton was once a snow and skateboarder in his youth. In the realm of snowboarding, he awed young fans and revolutionized the industry with a new popular move called the “rodeo flip”. Introduced through commercials, he became involved in the process of filmmaking. Now he focuses to work and create artful pieces of film to entertain and encourage audiences across the world.

Can you name a few memories you had when making the film?

There’s was a pretty unique moment around week three when a story came out in the Portland Tribune about the production. I was filming with a small crew on the Burnside Bridge when out of nowhere a older homeless man came up to me and asked if I was Shackleton. I obviously replied “Yes”. So in his hand he has a rolled up newspaper and he tells me with a fresh early morning drunken slur, that he knows that I’m making a movie about him and if I don’t stop immediately that he would be forced to contact his lawyer back in Hollywood. I assured the man that the film was in no way about him and after a few confused looks he went on his way and I got back to filming.

Do you prefer to write or direct?

I really enjoy both aspects of the process. When it comes to writing it’s very fulfilling creatively for me. I like the process of inventing a story completely in your mind. And when it comes to writing screenplays specifically there’s also the whole element of how what you write has to translate into picture and sound in order to portray the characters plight visually. And for me everything starts with the story and ultimately the final shooting script. As far as Directing, that is where the film is built. It’s the choices that a director makes, that determines the overall movie. Writing and Directing are two totally different animals and I look at each one as two links in the massive chain of people that make a film.

Which directors inspire you?

What can you tell me about Street?

Street is based on the true story of a Lexi played by Laura Ramsey, who runs away from an abusive single mother. She begins living in and around an abandoned building in downtown Portland, Oregon with Eric played by Toby Hemingway, a heroin addicted street kid. They spend weeks roaming the city and falling in love. Eric leaves town and Lexi behind as she finds herself alone and pregnant. She spends a long and lonely winter before taken in by Devon played by Vivica Fox. Lexi begins to find a normal life again as well as a friend in Devon. But just as she is back on her feet Eric surfaces and convinces her to start a family together. I cant give away the ending but it’s some of the most emotionally powerful work I’ve seen. And Laura Ramsey delivered it perfectly.

What is the due release date for Street?

The film is just completed and the trailer has been released. It’s due out sometime this winter.

Where can loyal fans discover more about the film?

How can fans help spread the word about the film?

Anything helps. Go see the film, tweet it, tell your friends about it, blog about it. 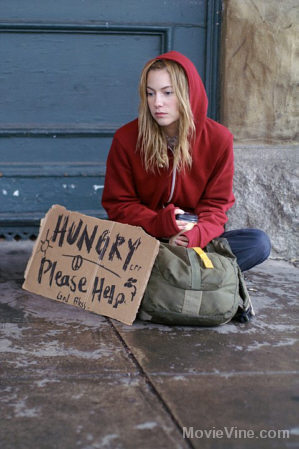 How long did it take to shoot the film?

Principle photography was done in 24 days. I wanted a little more time than the usual low budget so the actors would be able to work the heavier scenes. And then there was about a week of b-roll that the cinematographer Adam Silver and I went back and shot.

Was it an enjoyable or grueling filming experience?

It was both for sure. Twenty four days on an indie in Portland’s pouring rain can beat the crew up pretty bad. But we were doing great work every single day and everyone felt it so we all pulled together as a team and made it happen.

Are you expecting the film to be a wide release?

I just hope people enjoy the film and are affected by the story. Everything else is a bonus.

Does the film have any possibility of a sequel?

You never know. I think a series on a group of street kids and there everyday life and struggle to survive could be very interesting and engaging.

Looking back, what was your favorite aspect of Street?

The whole overall experience was great. The crew was superb and fight the fight with me every day. The actors all came in with top caliber performances as far as I’m concerned and every time I get to make a film I learn so much more than the time before so I embrace every moment and try to make the best of it.