Paul Sampson is a Director, Writer and Actor who has worked on over 20 films and is recently working on production for Night of the Templar.

Q. Looking back, is film your most wished for career choice?

A. Are we talking fantasy or reality? I think when I was younger, my ‘career choice’ would have been that of a Professional Athlete (Football or Baseball) or a Rock Star (lead screamer), but again, those careers paths were more fantasy. Come to think of it, I guess Acting as a profession can be viewed by many as also being a bit of a fantasy. So in my case, seeing I didn’t become a Professional Athlete or Rock Star, I settled on the Silver Screen … we all make sacrifices (laughing)…and no, I never wanted to be an Astronaut. The thought of eating a pill as a meal replacement never excited me.

Q . Who in life has inspired you?

A. Jesus Christ … or better yet, the Legend surrounding him. Talk about sacrifice. Wow!

Q. As a young child, did you always have an interest in film?

A. No. My brothers and I weren’t really allowed to watch much TV, and I really don’t remember going to the cinema as a family… ever. As a result, our thoughts weren’t influenced or controlled with the ‘norm.” Luckily, we were forced to use our imaginations when we played make believe and created (usually) outrageous scenarios. When we played “War” or “Cowboys & Indians” (call me Tonto) with the neighborhood kids, it was just improv stuff, like kids do. I never watched a TV show and wanted to be part of the ensemble or saw a movie and related
to a kid my age thinking I wanted to play his role. Yes, I was the lead in a handful of plays in elementary school, but it wasn’t like there were camera angles running through my head. I never thought of eventually ‘acting’ out my thoughts through a media such as film or television. 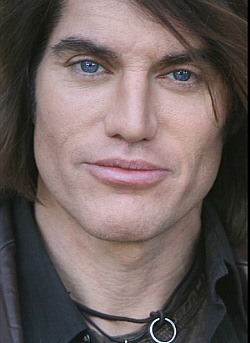 Q. What roles do you see yourself fitting into the most?

A. Treat people the way you’d like to be treated…unless, of course, you’re into S&M, because that could result in jail time. Seriously, don’t hurt those that put their trust (love, commitment) in you…and oh, yeah, “The truth shall set you free” … but that’s more a saying – or a really cool tag line – than a “moral.”

Q. Do you prefer to act, direct or write?

Q. What notable character would you wish to portray?

A. The Wolfman… talk about internal struggle! I mean you’re the hunter and the hunted all in the same night. You can rip out any Mother F—–er’s throat who gives you shit with your bare hands and all along your hair looks fierce. You wake up the next day, not sure exactly what you did the night before, but you know it probably wasn’t good…and whatever you did do, you know it’s going to leave a mark…literally. Come to think of it, that kind of sounds like last night.

Q. What film would you remake if you had the chance?

A. I wouldn’t. There are so many high concept ‘themes’ and unchartered waters to be traveled, and so little time. If somehow I exhausted all original thought I would change my craft. I’m not a studio. I’m not in the business to regurgitate ‘safe.’ Be honest, what percentage of remakes that you’ve seen totally overwhelmed you in a positive way.

Q. Name one goal you have in life.

Night of the Templar | Paul Sampson