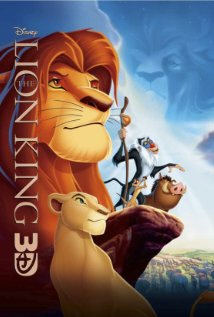 So let’s talk about The Lion King 3D. I toyed with reviewing the film, but honestly that would be a pointless endeavor. The movie has entered the lexicon as a definitive classic, and anything I’d have to say about it would be moot. I’m more interested in the success the film is having, and what that means for Hollywood from here on out. Last week we reported that the re-release of the animation classic cleaned up at the box office, much to everyone’s surprise. This weekend it beat all comers again, including the expected heavy hitter Moneyball, which featured mega-star Brad Pitt and was expected to start gathering Oscar buzz off the success. Oh well, Columbia will have to figure out another strategy.* With nearly $63 million in the bank off of an $8 million investment to convert the film to 3D, Walt Disney Pictures may have shown the rest of Hollywood the way to quick profits in an increasingly unsure marketplace.

The studio system is leaning heavily on sequels, reboots, and remakes to get them through this recession. Once the latest box office receipts came in, one can imagine studio heads all over Hollywood looking through their back catalogues for the perfect four quadrant hit that can be hastily given a 3D face lift and re-released into theaters. After all, why spend millions upon millions of dollars on a remake or reboot when you could just put out the same movie people already love? Universal execs must be eyeing their Thing prequel with increasing trepidation. The film cost the struggling studio nearly $80 million, and the buzz surrounding it is toxic. Fans hate the idea of it. Teens don’t get it. It will most likely sink like a stone, and if they could turn back the clock and put out a 3D version of John Carpenter’s classic with a mere $6 million price tag, they probably would rather do that.

So we’re going to probably see a lot of these coming out in the next few years, most of them announced in the next few months. But my question is this: how many surefire hits does Hollywood really have on its hands? Disney has plenty. They could (and will) put out 3D version of Aladdin, Beauty and the Beast, Little Mermaid, Sleeping Beaty, Pinocchio, Bambi and many more before even beginning the scrape the middle of their barrel. Let’s look at other studios. Star Wars is already set for a re-release, as is Titanic. Raiders might be getting the treatment. Jurassic Park? Forrest Gump? Back to the Future? What other major, beloved film is screaming for a 3D release?

My point is Hollywood will only be able to ride this fresh new horse so far, but the industry is incredibly short sighted, so this horse will be ridden very hard indeed. What does that mean for us, the movie-going public? Well, it all boils down to the art vs. commerce argument that’s been raging for decades, and has honestly gotten to be boring. Far better writers have discussed the issue in much better ways than I ever could, so let’s put that aside for now.

I’m interested in the way nostalgia has become king, having such a stranglehold on our collective psyches. We’ve mentioned the abundance of remakes and sequels, and we could continue to mention adaptations of beloved properties from our childhoods, stuff like Transformers, Captain Planet, and GI Joe. It seems moviegoers are hell bent on reliving their childhoods, sticking with the familiar and safe, rather than branching out. But this 3D re-release idea, it makes me feel like Hollywood is close to crossing the Rubicon into terrible territory. By circling the wagons and closing off new content, studios force us to consume what we’ve already properly digested. And why wouldn’t they? We’ve given them no reason to think we want anything else, and they’re set to make a tidy profit off of it. But the end result of this thinking is the movie-going public turning into cultural human centipedes, forced to choke down what previous generations have already consumed.**

Don’t get me wrong, I loved seeing The Lion King in theaters again. It first hit screens when I was six, and it was great to cement my hazy childhood memories with new ones from an adult perspective. Disney was able to deliver something special, and they’re a company that knows the value of their legacy. No expense was spared in making Lion King look absolutely beautiful. I can’t imagine the same will be done to Ghostbusters, or Top Gun, or whatever second-tier film gets a re-release. There will be a drop off in quality, and when you feel like you can see it coming, I urge you to skip it. Look the other way. Find something new, and exciting, and if we all embrace the new we can let the old stay old. And if money is going towards the new, Hollywood will follow. They only want your money, so vote with your dollar. Try something new.

*That sounds snide, but for the record: Moneyball is a damn good movie, and definitely worth your time. I highly recommend it

**If you happen to be eating while reading this, sorry!