The Lion King is definitely a family favorite movie that is great for everyone’s collection. Below is the press release info for both The Lion King 1.5 and The Lion King 2 on BD & DVD for March 6… 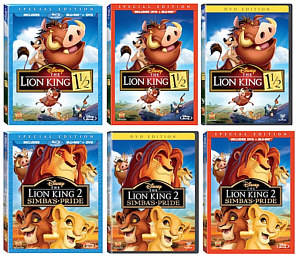 Synopsis: Hilarity reigns in the motion picture comedy-adventure that takes you waaay back to the beginning before Simba’s tale began…now more fabulous than ever for the first time in a 2-disc Blu-ray Combo Pack!

From their uniquely hysterical perspective, Timon and his windy pal Pumbaa—the greatest unsung heroes of the savanna—reveal where they came from, how they helped Simba save the Serengeti and what really happened behind the scenes of The Lion King’s biggest events.

This essential chapter of The Lion King trilogy features your favorite characters voiced by the original cast (Nathan Lane, Matthew Broderick, Ernie Sabella plus Julie Kavner and Jerry Stiller) and music by Elton John and Tim Rice. You’ll feel the love for every outrageously funny moment.

Deleted Scenes
Director Bradley Raymond and Producer George Mendoza explain why these segments did not make the final film.

Timon: Behind the Legend
Hosted by Peter Graves, this mock-umentary traces Timon’s childhood. There are interviews with Timon’s mom, Uncle Max  & Pumbaa, plus snapshots show him growing up.

Before the Beginning: The Making of Lion King 1 1?2
Director Bradley Raymond and Producer George Mendoza walk viewers through the film… from before the beginning.  Brad  and George are silhouetted against their own film with a remote, just like Timon and Pumbaa.

“Grazing in the Grass”
Music video performed by Raven.

Synopsis: The king of animated films reigns in this final chapter of The Lion King trilogy, now breathtakingly beautiful for the first time in a 2-Disc Blu-ray Combo Pack! Experience the power of “Upendi”—which means “love”—as Kiara, Simba’s strong-willed daughter, seeks adventure away from her father’s watchful gaze. Timon and Pumbaa can do only so much to protect her, especially when she encounters an intriguing rival, Kovu, a cub who is being groomed to lead Scar’s pride.

As Kiara and Kovu search for their proper places in the great “Circle Of Life,” they discover that it may be their destiny to reunite their prides andbring peace to the Pride Lands.

Featuring the original all-star voice cast, breathtaking animation and enchanting songs, Kiara and Kovu’s adventure thrills audiences of all ages as the glorious “Circle Of Life” continues for a new generation.

“One By One”
An original animated short with vocals by The Lion King vocalist Lebo Morake.

Timon & Pumbaa: Find Out Why
In this series of animated shorts, Timon and Pumbaa provide answers to some of life’s most puzzling questions including:

5.     Why does an airplane fly?
Proud of Simba’s Pride
A featurette that traces the making of the movie.