Hey there, everybody! Tonight’s the big night, and the stars are currently walking the red carpet and heading into the Dolby Theater. The ceremony starts it about an hour, and I’ll be updating this page during commercial breaks with the results as well as commentary, analysis, and a breakdown of how my predictions fared. I’ll also be live tweeting the ceremony, so if you don’t want to wait for the commercial updates and would prefer minute to minute updates, follow me over there.

Before we begin I’d like to thank Wendy Shepherd, the owner of MovieVine, for hosting my analysis. I’d also like to thank Melissa Shannon for creating the banner image used for this article.

And now, on to the main event……

8:57: Well, so far so good. Seth MacFarlane has done pretty well with his Oscar hosting duties, and that “We Saw Your Boobs” song was great. The dance bit with Charleze Theron and Channing Tatum definitely did well. And let’s face it, Flight would have been a whole lot better if it was performed by sock puppets. And Captain Kirk is always a plus.

The first award of the night, Best Supporting Actor, gets handed out by Octavia Spencer. And the winner is…Christoph Waltz!!!!!! I didn’t pick him, but I’m very glad he won. Django Unchained deserves all the love it can get. Right now, I’m 0/1

9:02: Next up is Paul Rudd and Melissa McCarthy presenting the Best Animated categories: Paper Man wins short and Brave wins Best Animated Feature. I thought Frankenweenie would take it, so I’m 0/2

9:15: The Avengers assemble and give Life of Pi the Best Cinematography and Best Visual Effects awards, and that’s a few I DID predict, so I’m 2/4.

9:20: Channing Tatum returns to the stage with Jennifer Anniston in tow to deliver the Costume and Make Up awards. Costume goes to Anna Karenina, which I predicted, and Make Up went to Les Miserables, both of which I called, so I’m 4/6

9:40: Ben Affleck steps out to present the Best Documentary Oscar, and the winner is Searching For Sugar Man. I called that one, so I’m making abit of a comeback at 5/7

10:22: Well, after a lengthy tribute to movie musicals of the past decade, Marky Mark and Ted the Teddy pop up to present Sound Mixing and Sound Editing awards. Sound Mixing goes to Les Miserables, and Skyfall and Zero Dark Thirty wins Sound Editing. This is the first tie in recent memory. Could there be any other ties coming?

10:29: Christopher Plummer presents Anne Hathaway the Best Supporting Actress statue, and I am 9 for 11 so far.

10:40: And now Sandra Bullock is on hand to present the award for Best Editing. The award goes to Argo, which I predicted. I’m 10/12

10:53: Kristen Stewart and Daniel Radcliffe show up to present the Production Design Oscar,and Lincoln takes it!! That’s a shock, and I’m down to 10/13

11: 18: And now the cast of Chicago is on hand to present the Best Original Score to Life of Pi and Best Original Song to Skyfall, both of which I predicted. I’m 12/15.

11:27: Charleze Theron returns to the stage with Dustin Hoffman to present the screenplay awards. Best Original Screenplay goes to Quentin Tarantino for Django Unchained and Argo wins Best Adapted Screenplay. With that, I’m 12/17, but I love both these winners so I’m really ok with it.

11:37: Michael Douglas and Jane Fonda show up to present Best Director, and the winner is Ang Lee!!!  I’m 13 for 18 now, and really glad Lee took the gold away from Spielberg!!!

11:49: Jean Dujardin takes the stage to present the award for Best Actress. And the winner is….Jennifer Lawrence!! I got this one wrong, so I’m now 13 for 19, but I loved Lawrence’s performance so I’m cool with being wrong.

11:52: Meryl Streep comes out to give Daniel Day Lewis the Oscar for Lincoln, which has been a give all season long. I’m now at 14 out of 20.

12:00 AM Jack Nicholson is at hand to present Best Picture with the help of First Lady Michelle Obama, which is…kind of weird, to be honest. Anywho, Argo wins the big prize, and Ben Affleck accepts with George Clooney and Grant Heslov flanking him. Affleck seems genuinely moved by the win, and his speech is one of the better ones tonight.

I’d like to thank you all for joining me here tonight. I really enjoy live blogging and tweeting the ceremony, so thank you all very much for following along. I hope you all had a great time, and I’ll see you all here this time next year. Till then, goodnight. 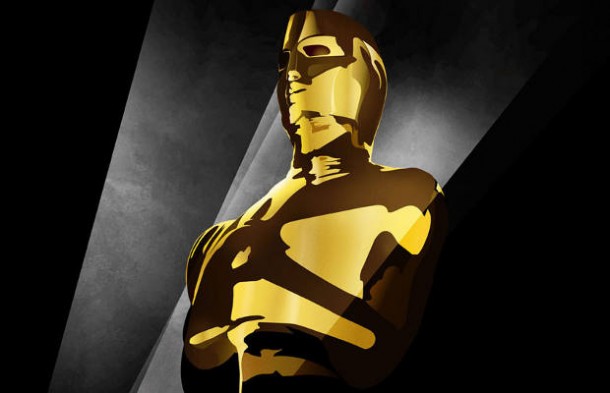