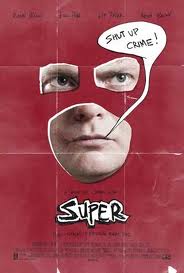 This startling black comedy is filled to the brim with extreme violence, aspirations for assuming heroic responsibilities as well as the more human response to dealing with them. Compared to the more stylised films of late such as kick ass, this is a step into grittier territory where superhero antics are relished with more violent tendencies.

Enter the Crimson Bolt or Frank (Rainn Wilson), conjured up through the unlawful (in his mind) ‘kidnapping’ of his wife (Liv Tyler), a recovering junkie and alcoholic who is dragged back into her old ways by her new partner (Kevin Bacon). His adventures see him develop his alter ego from his weapon of choice to his new found side kick ‘Boltie’ played by a show stealing Ellen Page. They both set off to reclaim his wife back.

However, the story is not as simple as it sounds since it deals with both bizarre and touching themes. The former for instance relates to visions of obscure enlightenment that helps our hero through his troubled times, including a disturbing scene where he is literally touched by God. Yet such references to religion in this film are twisted by Frank to justify his delivery of justice. Either way, we embark on a journey where he discovers himself and his capabilities of what he can achieve in life. 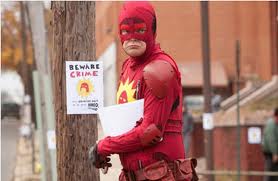 However the justice he does delivers is brutal, especially in one striking scene where the Bolt equips his wrench to deal with a queue skipper, only to crack the poor man’s skull open as well as smacking the woman who objects. The violence does not mess you around, instead being blunt to creating a shocking effect that satirises any fight for justice in other films. Whats more to be gained here though is the humanistic quality it provides, not in sentimentality, but in its real threat to the character’s lives; at no point do we feel assured the characters will live through any ordeal as they face realistically dangerous situations. The final act delivers this point in a sudden and devastating blow which I will not spoil here for you, but rest assured you do not see it coming.

The only negative point in this film is that at times the atmosphere feels a bit empty and slow, and some of the character’s could’ve had more screen time to develop such as Liv Tyler and Kevin Bacon to reinforce Frank’s aim to break them up (literally). Although, the characters are also portrayed brilliantly nevertheless. Frank’s unfortunate character evokes a sympathetic hold on the viewer as we try to root for his struggle to set his wife free, although it is his relationship with Boltie that works so effectively. Ellen Page again defies her innocent appearance with a psychotic personality that presents a worrying enthusiasm for taking her superhero role too seriously.

All this alongside neat little touches of occasional hand drawn animations, montages of extreme crime fighting and obscure comedy, this tale manages to stand its own against other superhero competitors, even if it does leave them bleeding on the floor.