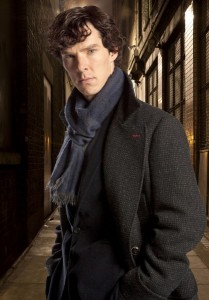 If you haven’t watched the BBC’s Sherlock, you are sincerely missing out. It does everything right with the Holmes’ stories that the Robert Downey Jr. films got wrong. Part of that comes from the performance by Benedict Cumberbatch as Holmes, and Hollywood has taken notice. The thespian appeared in Spielberg’s War Horse this winter (he’s the guy that yells “Be brave!” at the end of the trailer), and now Spielberg’s protege J.J. Abrams has enlisted him for a major role in Star Trek 2.

Variety reports that Cumberbatch has landed a lead part, and asserts that the Sherlock star is playing the villainous role Benecio del Torro turned down and Edgar Ramirez auditioned for in the past few months. Many speculated the villain would be Khan, but maybe that’s no longer the case. Or maybe Abrams is hell bent on throwing Trekkers a heckuva curve ball next year.