Anchor Bay has announced the release date of The Little Angel, a children’s story, that will be released on DVD this November 15th. Here are some video clips:

…and his friend Halo!

Here are the full details: 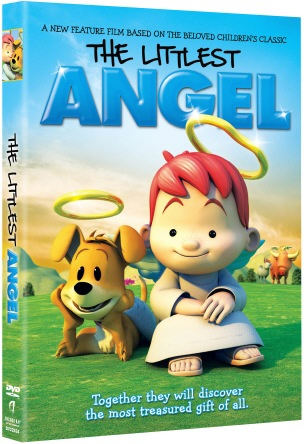 Some Angels soar the skies, and some fall a little short. Anchor Bay Entertainment presents the DVD release of the new animated feature film, The Littlest Angel, heading to retail on Tuesday, November 15th. A colorful adaptation of the fifteenth best-selling children’s book of all time, The Littlest Angel takes us on a rousing adventure with a young, and sometimes mischievous, Angel, who must return to earth and earn his wings, a task that doesn’t prove to be easy. Experience the love, laughter and magic of one of the most popular children’s stories of all time. From the classic book by Charles Tazewell, comes this lively CGI animated version filled with both humor and heart.

The Littlest Angel tells the story of a young boy who arrives in heaven before his time. Home-sick and lonely, he will travel back to earth, with his friendly pup Halo, to retrieve a most selfless and precious gift for The Baby Jesus. First released in book form in 1946, The Littlest Angel became popular for its ornate words and phrases paired with beautifully muted oil paintings. Tazewell’s book was adapted into a TV musical in 1969 starring Johnny Whitaker, and theatrical versions continue to be done by schools and church groups today. The author would follow-up with another childhood favorite, “The Littlest Snowman,” that would be read annually on the “Captain Kangaroo” show.

“This is a story that has made so many people happy over the years,” says Lance Thompson, one of the producers of the film. “We’ve added some new elements to this production, but this is still The Littlest Angel everyone remembers from their childhood, and one that parents will enjoy introducing to their kids. I think Tazewell would enjoy knowing his work lives on.”

It’s a modern twist on the timeless tale of an Angel that discovers the greatest gifts in life are faith, friendship and doing the right thing. This new version of The Littlest Angel features wonderful animation and great vocal talent, including Ron Perlman (“Beauty and The Beast,” Tangled), and is sure to become a holiday favorite, much like the book it’s based on. The Littlest Angel is a motion picture that will put a smile on everyone’s face, and what better gift is there than that.

For more information about The Littlest Angel go to www.thelittlestangelmovie.com