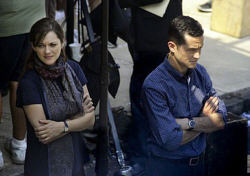 The return of Batman comes with many challenges as he faces Bane in the upcoming 2012 film, The Dark Knight Rises. The new photos include, amongst others, Joseph Gordon-Levitt and Marion Cotillard. The film stars Christian Bale, Gary Oldman, Michael Caine, Tom Hardy, Morgan Freeman and Anne Hathaway. The highly anticipated film is to be release on July 20th, 2012. (click for images)