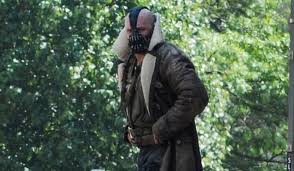 With all the surprising reveals of set photos and glimpses of Bane’s character, its enabled us to guess at his role and how effectively conceived he has been. Personally I’m not too excited at this point. Maybe its because of the poor quality these pictures display, but the same thought keeps circling in my head that here he just looks a bit… bland. However this goes with the commando trousers and massive coat which just seems rather generic. Instead he appears to be more intimidating without the extra costuming, as in my previous article I mentioned how he looked terrifying approaching Batman with his topless hulking figure.

Another thing is height. In both the clips and videos revealing a fight scene, he looks to be the same height as Batman. Not very threatening you think but it has led me to speculate that maybe the venom hasn’t fully affected his body yet. Maybe at this point he is still going through the transformation, as at the end of the teaser, he definitely appeared to be much stronger.

What still makes his character intriguing is the mask, which succeeds in not appearing over the top, instead capturing a modern feel that draws to Nolan’s realistic vision. My main concern though is whether Bane is the right choice to top the Joker. Despite the fact that he is supposed to be intellectual, there is the risk that Bane may only be presented as being all brawn plot wise. Overall though there will probably be nothing wrong with the end result as so far the series has succeeded in its portrayals, lets just hope it stays that way.