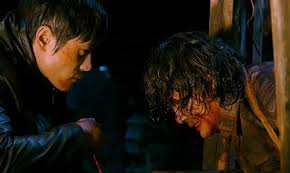 A simple yet effective revenge thriller that involves a terribly violent cat and mouse game, happens to become one of the most brutal releases so far this year. Though the one being forced to suffer is the killer, played to perfection by Oldboy’s Choi Min-Sik; portraying a merciless killer that delivers a twisted mentality. Showing no mercy to it’s audience, you are pinned to an uncomfortable display of vengeance and disturbing acts, yet the film still manages to compel you to watch.

The protagonist, a detective, has discovered the ill-fated death of his partner, who has been killed in the most horrific manner. The scene of her capture is both sinister and cold, as a persistent helper by the road unleashes a terrifying assault that sets the wheels in motion. From this point, our broken hero unleashes an onslaught of aggression to potential suspects until he finally discovers the killer’s hideout. Followed with effectively conceived set pieces that covers the brutal game of hide and seek thereon, we begin to wonder whether our protagonist is becoming just like the killer himself. 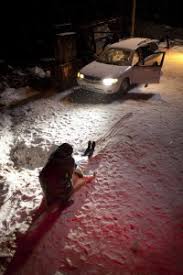 One of the best aspects of this film is the cinematography, which evokes the bleak grittiness with its mute colours and wintery settings. All of this to reflect the coldness of not just the killer but his pursuer too. The acting as well helps to entice the audience, containing a sense of relentlessness that gives the film a perpetuating energy.  Unfortunately, this energy begins to fade before its conclusion, which is one of the only flaws with this film. By continually capturing and releasing, the formula begins to get tiring and you begin to question whether its violence for the sake of it. Although maybe functioning outside the audience’s attention span, this could be the message it is trying to convey, that the endless brutality becomes exhausted and desensitized, therefore depicting a harsh reality where such violent acts are carried out unquestioned. This maybe the case for the killer, but in an emotional turn at the film’s climax, our merciless hero realizes the extent of his actions, and is torn as he fulfills his revenge. Upon decapitating his prisoner in front of his family to finally make him experience fear, he breaks down as he listens to the cries of despair and shock; yet what makes this even more sad is the absence of sound, instead overlayed with quiet and tragic piano. A bleak ending then, but it is powerful in fully realizing the film’s message and title; the ‘Devil’ can equally relate to our protagonist as it can with the killer.

Another strong aspect however is when the two leads clash with each other, resulting in rough but stylized brawls that really do keep you on the edge of your seat. Yet as I’ve said, the most effective character on show is the antagonist himself. Displaying perverse sexual urges and how he meets them, he drives a school bus to ensnare victims, ends with you truly despising his character and the lack of remorse he shows for how he meets his needs. Moreover, the fact that he begins to enjoy the game that has been set up, really establishes him as a sadistic and truly frightening character that will haunt you for quite some time. As uneasy it may be to watch, it does contain some powerful cinema that explores the dark recesses of our urge to get revenge.