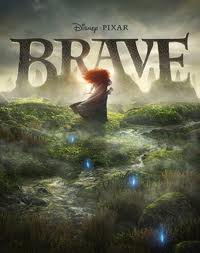 Pixar takes a long time to get their films up and running, and for a couple years there’s been whispers of their first fairy tale film that also has their first female lead character. Animation nerds such as myself have been itching for it to get here, and now that a trailer and poster is out there, we finally get an official synopsis that does away with all the smoke and mirrors:

A grand adventure full of heart, memorable characters and signature Pixar humor, “Brave” uncovers a new tale in the mysterious Highlands of Scotland where the impetuous Merida (voice of Kelly Macdonald) defies an age-old custom and inadvertently unleashes chaos, forcing her to discover the meaning of true bravery before it’s too late.”

My first thought is that this sounds like a slight twist on Princess Mononoke, the Hayao Miyazaki classic. It’s definitely an about face from Cars 2, a film I liked well enough but got slammed my most critics for not having the usual Pixar touch. All the naysayers will surely change their tune next summer, as Brave looks to be one of Pixar’s best yet.