With a cast headlined by Bruce Willis and Catherine Zeta Jones and a director that has The Queen and High Fidelity on his resume, one wouldn’t be mistaken to expect a lot more out of Lay The Favorite. There’s plenty of talent on hand here that’s given us some great work in the past, and even though Lay The Favorite feels a lot like a straight to DVD feature, one could understandably have moderately high hopes for this one.

Unfortunately Lay The Favorite disappoints on nearly every level. Based on Beth Rayer’s memoir, Favorite is essentially a riff on Showgirls without any of the satire or grit. This is a breezy movie when it should be anything but, detailing a small town girl’s adventures in Las Vegas with all the gravitas and wit of a blundering elephant. There are massive tonal shifts in Favorite that director Stephen Frears has absolutely no control over, and his lack of control strands his cast in a story that’s unremarkable at best and dreadfully dull at worst.

The ensemble cast contains Bruce Willis and Catherine Zeta Jones as well as Joshua Jackson and Rebecca Hall. There is no question that these actors are extremely capable, but without anything of interest to do script wise, one can only imagine the idea of working with Frears is what brought them to Favorite, and it’s unfortunate that Frears is seemingly asleep at the wheel. There are moments here and there that Favorite pops, mostly thanks to Bruce Willis, and you get a glimpse of what this movie could have been, but they’re too far and in between to really recommend this one.

With an absent director and a cast that can’t gel with the inane script, Lay The Favorite will most likely be forgotten soon, and will be nothing more than clutter on the IMDB profiles of all involved. At best, this is a movie that’ll be in the $3 DVD bin at WalMart for years, and every once in a while someone will pick it up out of the bin and exclaim: “These people were in a movie together?!” That person might pick up a copy, but I doubt they’ll feel like they spent those three dollars wisely. 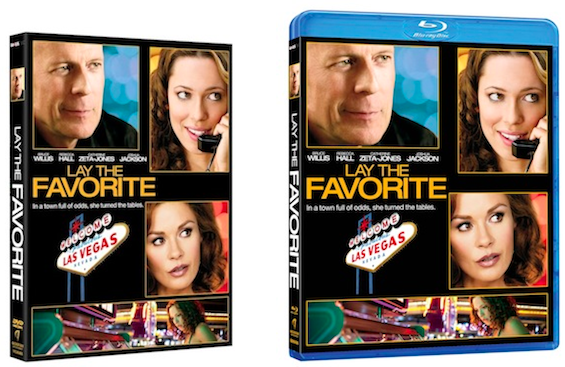 Lay The Favorite is now available on BluRay and DVD.