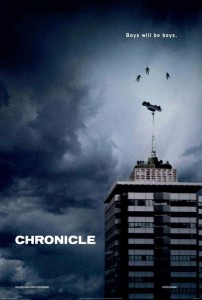 With just a week to go until its release in the UK (the 3rd in the States) ‘Chronicle‘ is shaping up to showcase a new generation of superhero films. So far the buzz has been undeniably positive,especially with its fresh take on the genre as the development of the character’s powers are documented through handheld filming (so not just a spin on superheroes but found footage too). The trailer is pretty clever at shifting the focus from school kid antics to dramatic power hungry consequences, and it is at this stage where comparisons to ‘Akira’ started to come up. I had only watched the film recently (admittedly a crime) however the whole concept of being overcome with power and unleashing it upon the world stuck as a similar theme. Maybe from all the trouble the live action film of the anime has suffered from, this could prove to be a suitable alternative. What would you do if you had superpowers and were able to use them freely?