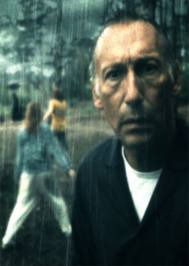 Not as dark as the title suggests, this black comedy/drama is a charming, quirky and moving portrait of a dysfunctional family (and friend) dealing with a newly made, if rather odd, acquaintance. What follows are rows, personal portraits and some wicked acting from an ensemble so varied in characters that there is not one person to dislike. The film kicks off when the Thompson family are dealing with accusations of murder, and this is demonstrated in a neat addition of mockumentary interviews where we can identify each character’s personality and take on the events (out of which the interaction’s between the family’s friend Tim Tanaka and Simon Anstell’s extremely weird psychologist is a brilliantly comic highlight). The murder in question is of the aforementioned acquaintance, who through an awkward meeting is introduced as Blake, who from then on gets increasingly involved with the family with dinner, drunken tennis and tragically the family’s loss of their pet dog Boy. 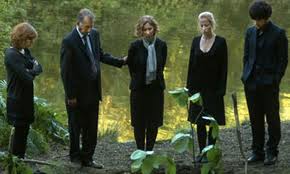 Without going into too much detail, the relationship between the Thompson’s and Blake become increasingly awkward and tense, not in a horror like fashion, but in dealing with a socially detached yet fragile spirit, whose character transforms in one of the most touching and reflective people I’ve seen on screen in recent times. Following on from this, it has to be said that the performances are fantastic with dry humour coming from the distanced parents, apathy from the daughters and Tanaka’s troubled youth. Combining these creates some great chemistry and is purely one of the highlights in this film. Visually the film has some neat touches too, as it experiments with hand drawn animations to depicting the more simplistic yet lovely scenery such as the titular pond in smothered in snow. Yet the story has such emotional impact that it leaves you contemplating the relationship with Blake well after the credits roll. For a debut from such young directors (Tom Kingsley and Will Sharpe) also nominated for a BAFTA,  this shows an extreme amount of promise and I bet we’ll be seeing more great films from the pair in the future.