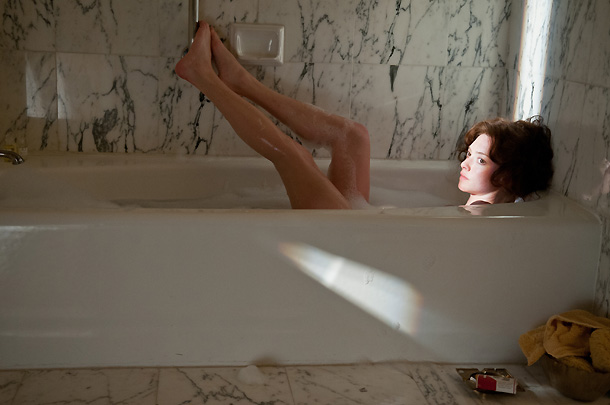 As a pre-teen in the 70’s, I remember riding the school bus down Santa Monica Boulevard in Hollywood, CA and seeing the marquee for Deep Throat. I didn’t quite understand the significance of this movie at the time. I also didn’t understand why this movie had such long lines wrapped around the block no matter what time of day or night. This movie along with the Happy Hooker book by Xaviera Hollander was the start of the sexual revolution. During those times it became acceptable to go to a movie theatre to watch an X-Rated movie. No more watching these types of movies at a Stag party or in some back alley theatre in the seedy part of town. Lovelace takes you back to 1972 to relive a time that some of us who aren’t old enough, only read about or saw in the documentary “Inside Deep Throat”.

Lovelace is probably not what you expect when you think of Linda Lovelace and Deep Throat. As I sit in the screening room with a majority of older men whom I’m sure saw the movie when it originally came out, I have preconceived thoughts of what this movie will be about. I was totally wrong in my perception, I must say. The movie gives you the insight of Linda’s most inner fears and beliefs. It shows how family can influence your life decisions in positive and/or negative ways, and also how one person can control your life and lead you down a destructive path.

The movie depicts a naïve young girl from a small town who was raised by deeply religious, strict mother (Sharon Stone) and father (Robert Patrick). Sharon Stone was unrecognizable in this role. Lovelace takes you on a ride from the screen test, to the behind the scenes drama of her husband’s insecurities of not being in control during the filming of the movie. Once the movie is complete you see how Peter Sarsgaard takes you back to 1972 with his portrayal of Chuck Traynor as this slimy manipulative person. Chuck tries to figure out how he can cash in on his goldmine Linda Lovelace, who has so eloquently been portrayed by Amanda Seyfried. Amanda I have to say played the heck out of this role and made you believe she was truly Linda.

Once Linda escapes the controls of Chuck you get the story from Linda’s standpoint. It takes a dark turn as you see the story from a troubled, abused and controlled young woman.

After seeing this movie maybe some other troubled soul will recognize their situation in Linda and do something about it. Great story telling by all involved!