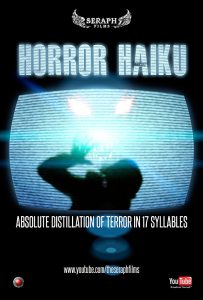 Horror Haiku: The Museum builds on the series’ tradition of transforming viewer-submitted haikus into horror vignettes. A haiku is a short poem, of Japanese origin, having a meter of 5 syllables, 7 syllables, and 5 syllables. The latest season invited viewers to submit original, terrifying poems all while exploring the mystery of a dangerous, paranormal museum. With a new host, new poems, and a chilling new mystery, Horror Haiku: The Museum will turn your nightmares into a reality.

Below are the episodes of Horror Haiku: The Museum Season 5 for you to watch below (rated R)…

HORROR HAIKU Season 5, Episode 9: The One That Got Away

————
Visit the official Seraph Films website for their latest creations.