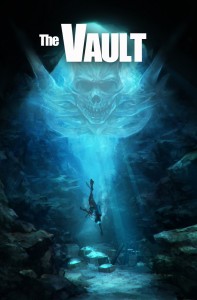 Already sold-out comic book, The Vault, is to receive a big screen theatrical adaption. The comic series has three issues of which to draw material from and hits stores this week. The story in the comics revolves around a few divers off the coast of Nova Scotia who uncover a sarcophagus that contains strange remains. The group eventually release an ancient evil upon the world.

The film is written by the same writer as the comic, Sam Sarkar and is to be produced by Johnny Depp.

Book description: “A small team of treasure hunters struggles to excavate a dangerous and legendary treasure pit before a massive storm hits Sable Island, the ‘Graveyard of the North Atlantic.’ Equipped with all the latest technology, the scientists believe they are prepared against all of nature’s fury, but nothing can prepare them for what they are about to unleash from The Vault.”