I’ll be honest, Sesame Street, The Muppet Show, and The Muppet Movie are major components to my upbringing. The Jim Henson characters are a heavy influence on my world views and sense of humor. I have many feelings about The Muppets, and they’re very conflicting. So much so that I’ve been holding off on a review so I can get the tone of the piece exactly right. I’ve been looking forward to the film’s BluRay release so I could check it out again and try to thoroughly digest the film, and Disney has released a press release giving the film a street date.

The Must-Own Movie For The Entire Family Debuts on Blu-ray ™ Combo Pack March 20, 2012

BURBANK, Calif., January 19, 2012 ––One of the year’s best-loved family comedies and among the best reviewed films of 2011, Disney’s “The Muppets,” starring Jason Segel, Academy Award®-nominee Amy Adams, and favorite celebrity couple Kermit the Frog and Miss Piggy — debuts March 20 on Blu-ray™ Combo Pack, DVD, Digital Download and On-Demand formats.  A must-own movie the entire family can enjoy, Disney’s “The Muppets” in-home release includes the DVD and music soundtrack packaged together and also offered as the ultimate Muppets experience, a ‘Wocka-Wocka Value Pack,’ which contains the movie on Blu-ray high definition, DVD and Digital Copy (three discs), plus a download card which allows fans to own all the songs from the film’s hugely popular soundtrack.

Disney’s “The Muppets” Blu-ray Combo Pack, with its flawless picture and pitch perfect sound, comes with a fantastic slate of bonus content including the laugh out loud “The Longest Blooper Reel Ever Made (In Muppet History––We Think).”  The exciting release also includes the hilarious featurette “A Little Screen Test on the Way to the Read Through,” which follows Jason Segel, Kermit, The Great Gonzo, Fozzie Bear, Miss Piggy and others as they get ready for the first day of production, and much more fun.

“Blu-ray is a great way to bring the Muppets into your home without having to worry about cleaning up after us,” said Kermit the Frog, commenting on the announcement. “And the behind-the-scenes extras are a revealing tell-all look at what it took to bring our movie to the big screen. It’s a must-see for fans of bloopers, flubs and slip-ups – which pretty much describes our act.”

And here’s the film official synopsis: 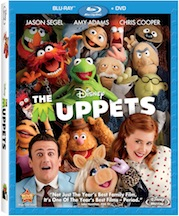 On vacation in Los Angeles, Walter, the world’s biggest Muppet fan, his brother Gary (Jason Segel) and Gary’s girlfriend, Mary (Amy Adams), from Smalltown, USA, discover the nefarious plan of oilman Tex Richman (Chris Cooper) to raze Muppet Studios and drill for the oil recently discovered beneath the Muppets’ former stomping grounds. To stage a telethon and raise the $10 million needed to save the studio, Walter, Mary and Gary help Kermit reunite the Muppets, who have allgone their separate ways: Fozzie now performs with a Reno casino tribute band called the Moopets, Miss Piggy is a plus-size fashion editor at Vogue Paris, Animal is in a Santa Barbara clinic for anger management, and Gonzo is a high-powered plumbing magnate.

You can pre-order The Muppets right here.