One of the best movies I’ve seen this year that I never got around to reviewing was The Grey, so I’m excited to hear that it’ll be arriving on BluRay soon. Hopefully I’ll have a review of the film available for you folks around the release date of May 15th, so keep an eye out for it!

Here’s an excerpt from the press release we received this morning:

When a plane crashes in the remote Alaskan wilderness, the survivors must battle extreme weather conditions, devastating injuries and a pack of rogue wolves in order to stay alive in the riveting action adventure The Grey, coming to Blu-ray Combo Pack with UltraViolet, as well as DVD, Digital Download and On Demand on May 15, 2012, from Universal Studios Home Entertainment.  Starring Academy Award-nominee Liam Neeson (Schindler’s List, Taken), The Grey pits man against nature in a non-stop, life-or-death battle that Jake Hamilton of FOX-TV calls “mesmerizing, electrifying and terrifying,” adding, “The Grey is a viciously unnerving epic adventure that will hunt you with excitement, bury you in panic and outright scare the hell out of you.” 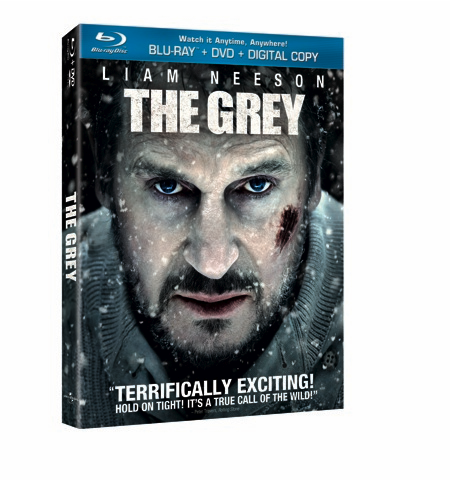 The Grey arrives on shelves May 15th, 2012. You can pre-order a copy right here.