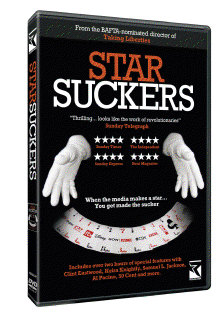 A darkly humorous and shocking expose of celebrity-obsessed media, Starsuckers delves into our addiction to fame and blows the lid on the corporations and individuals who profit from it. Directed by Chris Atkins, the BAFTA-nominated director of Taking Liberties, Starsuckers captures the reprehensible behavior of reporters who attempt to buy medical records and sell fake celebrity stories to major tabloids. Using a combination of never before seen footage, undercover reporting, stunts and animation, the film reveals the toxic effect the media can have on us all. This is the film that Max Clifford attempted to injunct. Clearly, he did not succeed.

Special features include extra scenes, a making of the film, and tongue-in-cheek interviews with stars such as Kiera Knightley, Clint Eastwood, Robert de Niro, Al Pacino, Eddie Izzard, and 50 Cent.

Five ways to enter to win one of 10 total Starsuckers DVDs BELOW. Each of the five areas will have 2 random winners chosen from each area. United States residents 18+ may enter. No purchase necessary. The prize is non-transferable, and no cash alternative will be offered. (ends 10/20/2012)…