Director Steven Spielberg is widely known as a master of audience manipulation, prone to sentimentality that makes him equally beloved and despised by the critical community. He is also on record as a huge fan of John Ford’s epics such as The Grapes of Wrath and The Searchers. So it’s no surprise to see that War Horse is a big sentimental epic that would fit right in with Ford’s filmography. It is also no surprise to see some people despising it.

I am not one of those people. I had a great time with War Horse, the adaptation of the stage play and children’s book that details World War I through the eyes of a simple farm horse. The first act of the film, which establishes the bond between the horse (Joey) and his boy (Albert), is very touch and go, but Spielberg needs the cheery, sun drenched farm to establish a home for Joey and viewers. When Joey is sold to the Army to make ends meet the rest of the film works as a tour of World War I as Joey is passed from owner to owner and Albert tries his best to find him. That’s where the film picks up considerably, and it keeps gathering emotional steam until the very end.

Of course, no one can depict a war ravaged Europe like Spielberg can. Joey sees a lot of shit, and its all presented via Spielberg’s keen eye for detail and world building. However, his roaming camera isn’t at play here, and its clear that the director is paying homage to his favorite auteur by using 1930s and 40s camera work, techniques, and tone. This may be off-putting to some modern audiences, particularly some of the stylized technicoloring (indeed, my cinematic companion hated the look of War Horse) but for some it may hit the perfect buttons that elicit the right emotional response.

And god save me, I have those buttons. This film plucked all the right strings to make me feel the horrors of war. The film is smart to use WWI to illustrate the sheer stupidity inherent to mortal combat. Unlike WWII, the American Civil War, or other justified wars that movies has thoroughly mined, WWI is seen by many as unnecessary and foolhardy. Without any obvious villains the audience can only sympathize with Joey and wonder why everyone has lost their minds.

So while I’m enthusiastic in my reaction to War Horse I’m tentative when it comes to recommending it to others. If you’re prone to sentimentality, or if you’re a fan of 30s and 40s cinema, then I can heartily recommend it. If you roll your eyes at movies like Babe and don’t care for films with anti-war messages, you may not be a fan. Spielberg pulls all the right strings and pushes the right buttons, but if you don’t like being poked and prodded I’d advise skipping it. If you don’t mind a little emotional manipulation, War Horse might be right up your alley. 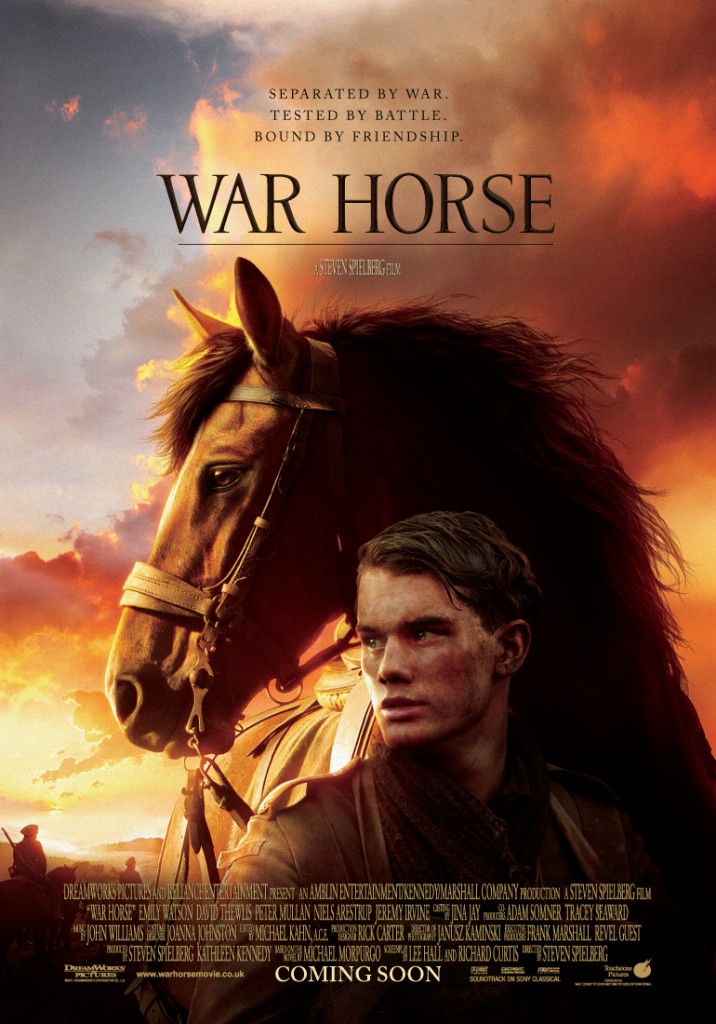 War Horse is in theaters now.