If you were to ask film buffs what got them into movies in the first place, the most prominent answer would probably be Star Wars. But the second most popular answer would certainly be horror movies, a genre that is usually seen as the awkward step child in the cinematic family tree. Due to low production costs and wide appeal every wannabe filmmaker has at least one crude horror film in their past. I know I’ve got a few. Some of these films get small distribution deals, and for every hundred piss poor horror flicks there’s a gem like The Evil Dead. Horror fans are usually steadfast individuals willing to give any VHS or DVD a try in the search for such a gem, and the result is a schlock centered shorthand: a set of rules that most flicks follow that any dyed in the wool horror buff can recite like the pledge of allegiance.

Then Scream came along and ruined it all. Wes Craven’s smart slasher flick ripped the Horror Bible from our hands and tossed it into the mainstream. Suddenly everyone knew the formula. Don’t get me wrong, I love Scream as a film, but I hate it as a piece of film history. It’s hard to take a genre seriously once Jamie Kennedy’s pointed out all the tricks up the magician’s sleeves.

With The Cabin In The Woods, Joss Whedon (the creator of Buffy The Vampire Slayer and Firefly) and Drew Goddard (the writer of Cloverfield) pick up the horror genre and give it a well deserved hug. Cabin is a smart and witty send up of the standard horror story: Five friends go on a vacation in the woods. Bad things happen. The pitch is simple, but Whedon and Goddard twist our expectations so thoroughly it’s no wonder the film’s poster resembles a Rube Goldberg machine.

The flick doesn’t start with those five friends, however. The film actually begins with Richard Jenkins and Bradley Whitford as a couple office stiffs buzzing around the water cooler and discussing their upcoming work assignment. Just as folks begin to wonder if they’ve walked into the wrong movie the title screams its way onto the screen and we’re taken to the five friends as they drive toward the titular Cabin. It’s soon revealed that Jenkins and Whitford are pulling the various levers and knobs that will poke and prod the young people toward their doom. The Cabin is actually a state of the art soundstage, and unspeakable terror is on the program for this evening. As the film unfolds we slowly learn why Whitford and Jenkins (as well as hundreds of other employees) are serving these lambs up for slaughter, and the whole affair works as a commentary on the state of the horror genre itself.

The five kids all fill the basic stereotypes the slasher genre revels in: There’s the Whore, the Athlete, the Scholar, the Fool, and the Virgin. The men behind the curtain arrange for their deaths in a particular order and fashion, but it doesn’t take too long for the Fool starts to feel like something isn’t right. But when these kids finally figure out what’s happening the shit truly hits the fan, and the criticism of their meta-awareness serves as a particularly poignant plea for a return to the good old days where horror movie characters weren’t contantly aware of horror movie tropes.

Cabin In The Woods isn’t a deconstruction of the genre but rather a reconstruction. Whedon and Goddard argue that the intellectual discussion and dissection of horror is all good fun but if we keep at it we’re going to destroy everything we love about the genre. Sometimes it’s ok to just let it ride.

But don’t misunderstand me: Cabin works on the visceral level as well as a intellectual one. The flick plays like gangbusters for both horror buffs and the casual viewer. There are plenty of scares, thrills, chills, and laughs to be had here. This is the smartest and funniest horror film since Edgar Wright’s Shaun of the Dead, another film that revels in the sheer joy a good scare can provide.

Cabin In The Woods isn’t just a great horror movie: it’s the best horror movie of the last fifteen years. And maybe more. This is a game changer for the genre, and one that deserves to be seen in a theater with a packed house. Don’t wait for the DVD. Go see it now. You’ll be glad you did. 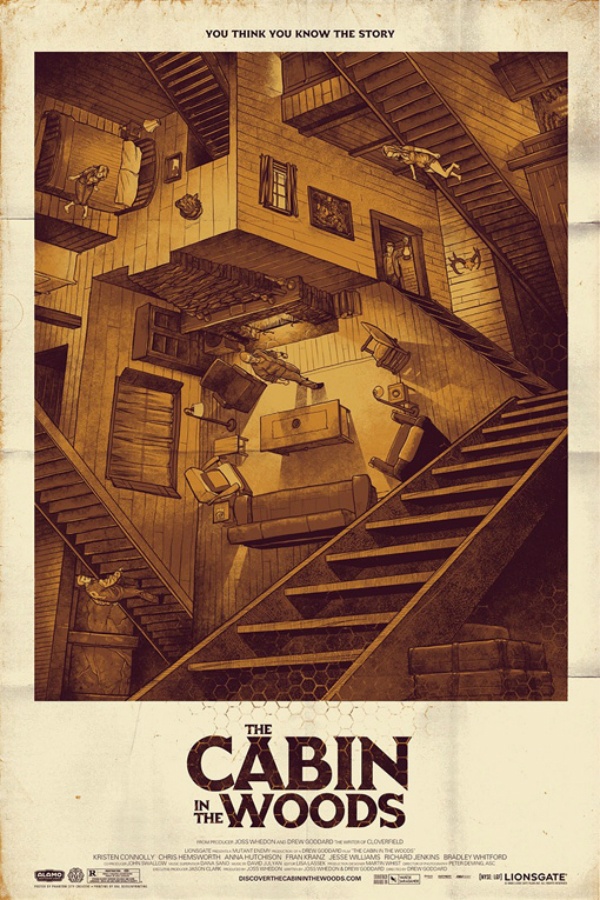 The Cabin In The Woods is in theaters everywhere right now.