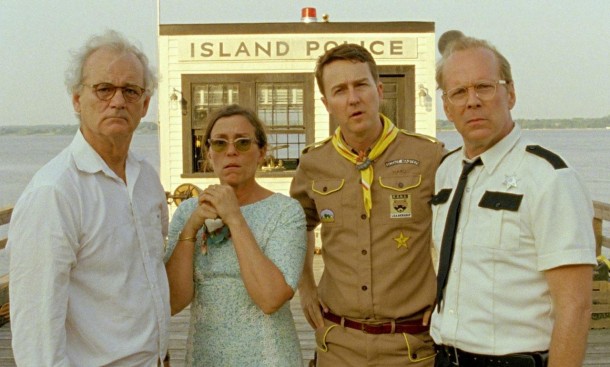 I’m not a Wes Anderson fan. I admire his commitment to a certain aesthetic, and I will never argue against his status as one of the foremost auteurs of the 21st century, but I’ve just never gotten on to the same wave length as him. I’ve found all of his previous films sporadically engaging at best and overbearingly quirky at worst. I was one of the few critics that slammed Fantastic Mr Fox, his most user friendly film, upon release.

With all this in mind you think I’d be leading the pack against Anderson’s latest effort, Moonrise Kingdom. I am pleased to report that this is not the case. Moonrise Kingdom is a wonderful film, and Anderson has finally found the perfect balance of narrative momentum, stylistic tics, and character quirk. This is Anderson’s cleanest work, a film that is unmistakably his that still allows viewers to enter the world he’s created rather than casually observe. Every film maker has that one movie that could sum up their entire career, and Moonrise Kingdom is Anderson’s.

Set during the summer of 1965 on a New England island community, Moonrise Kingdom tells the story of two kids from reluctant families on the verge of adolescence. There’s Sam, the Khaki Scout that excels at wilderness survival and little else, and then there’s Suzie, a well read girl that isn’t well versed in socialization. The couple meet and fall into a deep case of puppy love, eventually concocting a scheme to run away from home and live together in the wilderness. As the young lovers canoodle in the woods the adults in their lives form a massive search party as a storm brews off the coast.

Sam and Suzie are played well by newcomers Jared Gilman and Kara Hayward, and they’re supported by an excellent cast of seasoned veterans. Suzie’s parents are expertly sketched out by Bill Murray and Frances McDormand. Bruce Willis features prominently as the chief of police that searches for the youngsters while carrying on an affair with Suzie’s mother. In addition, Edward Norton’s Khaki Scout Troop Leader rounds out the cast and aids in the search with charm to spare. All of these actors have minor plot points that intrigue and delight, and if the film was just about them I’d have no complaints.

But the film’s primary focus is Sam and Suzie and their mutual sexual awakening; and this touchy subject is handled beautifully by Anderson and co-writer Roman Coppola. The awkward, lusty advances of twelve year olds is presented plainly but sweetly, not used for shock value or lewd, taboo provocation. Sam and Suzie aren’t Disney characters but rather real people, and you end up caring for them like you would real people.

Moonrise Kingdom was shot in Super 16, and the exacting detail that results suits Anderson well. Moonrise is a beautiful film that will play well on BluRay but deserves to be seen on the big screen. In the escalating war of film vs digital Kingdom stands firmly on film’s side, and I hope cinematographer Robert Yeoman gets recognition for his work. The whole film is colored to evoke golden honey, a nostalgic view of the past the fits perfectly.

The other perfect fit is the film’s complete lack of cynicism. Anderson’s previous works had plenty of heart but a bit of snark as well, and you could never tell if Anderson even liked his characters. There’s a love and joy in Moonrise Kingdom that makes it the feel good movie of the year. Young or old, cynical or optimistic, Moonrise Kingdom will move you, and you’ll be glad it did. It’s funny, and sweet, and ultimately comforting in the way we’re comforted when we return home after a long journey. I can’t recommend this flick highly enough. 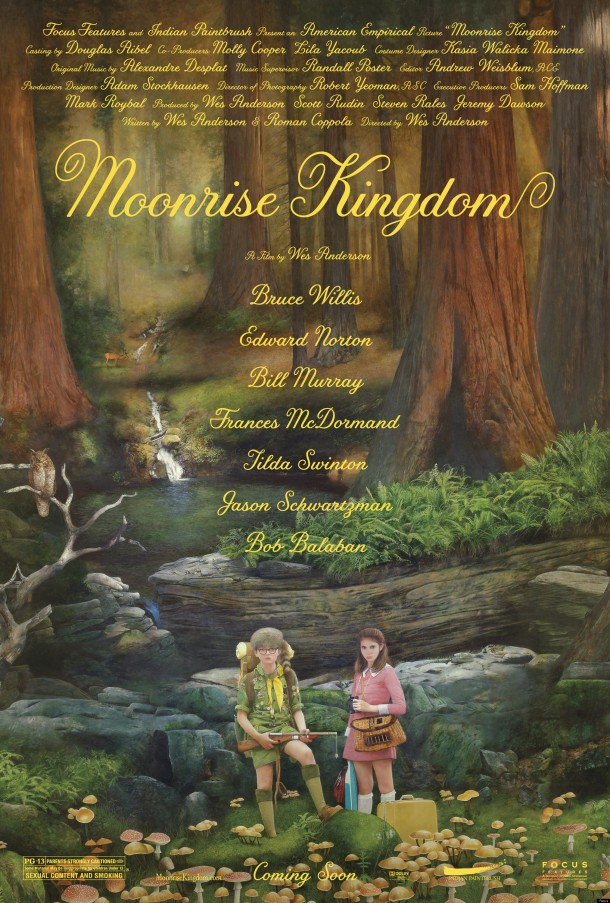 Moonrise Kingdom is now playing in a theater near you.