If anything, the Mission: Impossible franchise has been a showcase for each installment’s director. The first entry allowed Brian DePalma to stage an elaborate cloak-and-dagger exercise. John Woo’s sequel brought a Honk-Kong action influence, and J.J. Abrams showed off his Alias skills on the big screen in part three. So when Brad Bird, the director of The Iron Giant, The Incredibles, and Ratatouille signed on for the fourth installment those who followed his career knew audiences were in for a slick ride.

Tom Cruise has established the Mission films as his own personal playground, hiring precisely who he wants to work with and setting up whatever crazy stunts happen to be on his mind. Bird’s presence seems to energize the star, and additions to the cast such as Jeremy Renner and Paula Patton bring the franchise back to it’s ensemble roots. The result is quite possibly the best Mission yet, tying the first when it comes to thrills and intrigue but edging it out slightly in the laughs department.

Most of those laughs come courtesy of Simon Pegg, whose role of the tech-head Benji from M:I 3 is expanded greatly here. Pegg, Renner, Patton, and Cruise make for a wonderful team, the strongest yet for the series. If the next film featured more of this crew and their hijinks (and that’s certainly what the ending implies) than sign me up. The franchise began as a TV show that focused on team work, and now that the films have returned to those roots I hope it stays there.

The other hallmark of the series are the epic heists and covert-ops, which Bird stages wonderfully. Taking advantage of the IMAX cameras, Bird opens the frame to full 70mm whenever possible. The highlight is Cruise’s escapade outside the Burj Khalifa in Dubai, the tallest building in the world. These are the kinds of visuals that cinema was made for, period. The sequence will have you on the edge of your seat and holding your breath.

Here’s where I make special note of the fact that I saw this film in IMAX. Just as 3D was essential for viewing Hugo, IMAX presentation is essential for Ghost Protocol. I can’t imagine this film having the same impact on a regular TV set, even under the best of circumstances. Theatrical exhibitors have been trying to figure out how to lure people away from Netflix, Redbox, and their 3D TVs. Ghost Protocol proves that IMAX is the answer.

With thrills, chills, and excitement all the way through Mission: Impossible—Ghost Protocol is required viewing for any movie lover this holiday season. 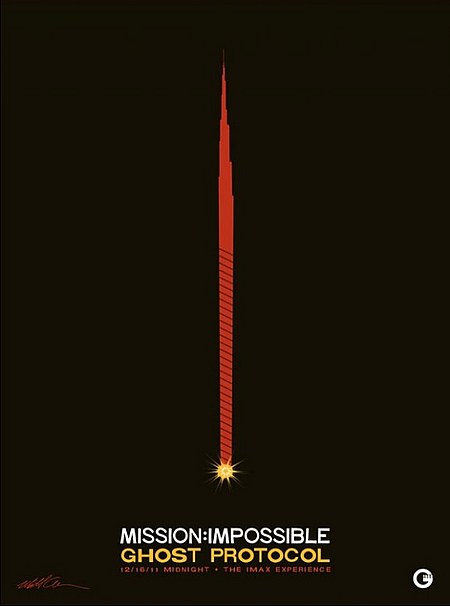