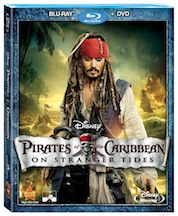 Skip-to-my-lou, jump up and down, and get ready… the time has finally arrived! Pirates Of The Caribbean: On Stranger Tides will be released on Blu-ray and DVD this October 18th! In this chapter of the POTC movies, Captain Jack Sparrow (Johnny Depp) searches for the Fountain of Youth. Along the way he discovers someone has stolen his identity. Of course he finds out who the culprit is while he’s looking for a ship and crew of his own. There are certainly different dynamics to this movie, which include the addition of mermaids and zombies. I wasn’t sure how these characters would play into this Pirates of the Caribbean story, and I wasn’t drawn to watch it just based on the movie’s trailer. However, they do play well in the creative way the story is written. You’ll get to revisit an old character favorite, Jack’s nemesis (Geoffrey Rush), and some new star characters including; Jack’s old flame (Penelope Cruz) and Blackbeard (Ian McShane). Pirates of the Caribbean once again brings epic high-quality fun!

I’ll honestly be happy to include this latest film in my Pirates of the Caribbean movie collection. I’ll tell you though, if you are going to buy the latest edition and want lots of features, the basic Blu-Ray/DVD 2-disc combo pack does not give you many extra goodies, so check out the 5 disc or 15 disc versions for the treats.

Here’s an overview of what are on the discs…

All of the above features plus
Legends of On Stranger Tides
In Search of the Fountain
Last Sail/First Voyage
Under the Scene: Bringing Mermaids to Life
Deleted and Extended Scenes with Intros by director Rob Marshall

From Disney and producer Jerry Bruckheimer comes all the fun, epic adventure and humor that ignited the original. Johnny Depp returns as Captain Jack Sparrow in Pirates Of The Caribbean: On Stranger Tides. A tale of truth, betrayal, youth, demise — and mermaids! When Jack crosses paths with a woman from his past (Penélope Cruz), he’s not sure if it’s love or if she’s a ruthless con artist using him to find the fabled Fountain of Youth. Forced aboard the ship of the most feared pirate ever, Jack doesn’t know who to fear more —Blackbeard (Ian McShane) or the woman from his past. Directed by Rob Marshall, it’s filled with eye-popping battle scenes, mystery and all-out wit.

Soon I’ll be doing another news post about some of the fun online goodies you can check out.