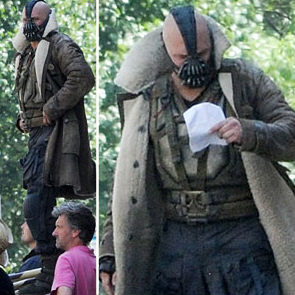 Some candid shots of Tom Hardy as Bane have appeared online, and to be honest they’re slightly underwhelming. But of course, all these on-set pictures are, since they aren’t properly color corrected, framed, etc. I’m sure Heath Ledger looked awfully silly walking around the set, but the finished film tells a starkly different story.

Not much is known about the film’s plot, but seeing as Bane is one of the few villains to actually physically defeat the Batman (going so far as to break his back in the “Knightfall” story line), it’s safe to say Bruce Wayne and Commissioner Gordon will have their work cut out for them in The Dark Knight Rises.