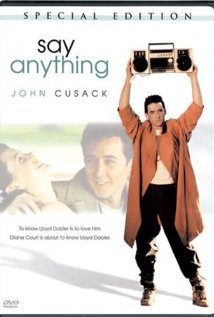 Well, this is unexpected. HitFix has a brief interview with Cameron Crowe (director of Almost Famous and Jerry Maguire) and he mentions considering a sequel to the 1989 classic Say Anything from time to time.

“It’s the only thing that I’ve written that I would consider doing that with,” Crowe told reporters. “I’ve thought about it from time to time and talked about it with John Cusack once and just said this is the only story that I kind of think there might be another chapter to that at some point.”

Of course, this isn’t confirmation that he’s got a script, or even a solid idea as to what the sequel would be about, but any film developed by Crowe is newsworthy. Aside from Jerry Maguire, Almost Famous*, and Say Anything the auteur has made Singles, Vanilla Sky, and Elizabethtown. All of these films are worth checking out, Crowe has a deliberate touch not often found in contemporary film making.He is currently filming We Bought a Zoo, which stars Matt Damon as the patriarch of a blossoming family who move to southern California and renovate a struggling zoo.

We Bought A Zoo opens December 23rd 2011, we’ll keep you posted on that Say Anything sequel.

*my own personal favorite film, for the record