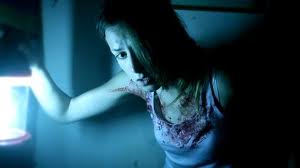 The Silent House is a short but sweet movie, following both Laura and her father as they are assigned by their friend Nestor to clean up an old, neglected house. Left on their own without any electricity, they have to face fear as some bumps in the night leads to very menacing occurrences.

Its main selling point promotes how the entire film was conceived in one shot. Whilst definitely appearing to be more convincing than past attempts (Hitchcock’s Rope for example) you cannot help but wonder whether a sneaky cut was made in the dark. The overall affect however is engaging, succeeding in becoming more than just a gimmick as we accompany Laura throughout pitch black corridors, exploring abandoned rooms with only the glow of her lantern to guide her. Moreover, unlike many handheld movies these days, the camera acts as a witness rather than an actual presence to the events of the film. Such freedom allows it to plays with audience’s expectations, as it could easily turn suddenly from Laura to something more striking. Consequently there are some nail-biting scenes that are guaranteed to make you jump in fear.

The house itself provides some highly unsettling scenery, from paintings with blank faces, artefacts evoking a Victorian feel, all complimented with fantastic sound design. Every creak, bump and bang are handled precisely to build the suspense even more, whether it’s quietly muffled or a sudden burst, it definitely keeps the audience on its toes. Sparse use of childlike music also unnerves the viewer, especially as the film opens to a large field, washed out of colour, where Laura slowly approaches the house itself with a brewing sense of dread.

Returning to the film’s use of a continuous shot, it acts as a double edge sword for the characters. On the one hand there is the acting, which hats off to the filmmakers, required intricate organisation in terms of simple aspects such as positioning and cues that are pulled off brilliantly. However, at times this means that certain aspects are not perfect: when all 3 character’s meet during the opening, some lines sound rushed and lazy.

However, this problem mainly presents itself in the final act, where the plot draws all elements together for a rather ambiguous reveal that with the lack of editing, means the twist has less impact whilst simultaneously leaving the viewer with a slight anti climax. Despite the twist being easy to realise, the nature in which it is shown adds confusion, and just before we want more answers, the film leaves us with a credits sequence that attempts to give us some more details to speculate on.

At the same time however, this might work for some, adding that sense of enigma created from an equally mysterious house, that throughout has used what it has to effectively scare, shock and disturb.