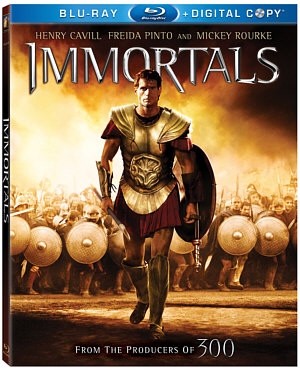 Immortals will be released on Blu-Ray and DVD on March 6, 2012.  So, now you can take home and watch the epic battle myth between the mortal god Thesaus (Henry Cavill) and the blood thirsty King Hyperion (Mickey Rourke).  King Hyperion wants to overthrow the Olympus Gods and find the Bow of Epirus to free the Titans who will destroy the earth.  It’s up to Thesaus to fight the battle against the King Hyperion and his army without the help of the gods.  It also stars John Hurt (older Zeus), Luke Evans (Zeus), Isabel Lucas (Athena), Stephan Dorff (Stavros), Freida Pinto (Phaedra), and Joseph Morgan (Lysander). You can also get the Immortals (3D/ Blu-ray + Digital Copy)