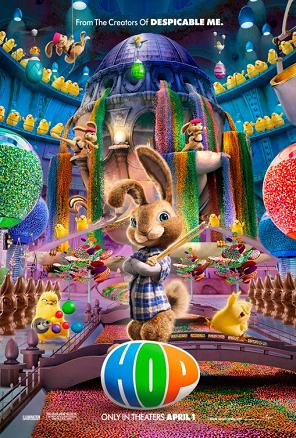 Hop is an animated comedy film filled with action and adventure.  The movie is about  Mr. Bunny (Hugh Laurie), who wants his teenage son E.B. (Russell Brand) to take over the family business in running the Easter Factory.  E.B. wants to do something else, like become a drummer in a rock n roll band.  He decides to runaway to Hollywood to make his dream come true.  Then he meets a guy named Fred O’Hare (James Marsden).  After finding out who this strange talking rabbit is, he decides to keep E.B.  At the Easter Factory Mr. Bunny calls upon a yellow chick named Carlos (Hank Azaria) to help him find his missing son and bring him back.  But, Carlos has something else in mind… to take over the Easter Factory.  Will he succeed in his evil plan?  You can find out on March 23, 2012 on DVD and on Blu-Ray.