The 84th Academy Awards will be handed out this Sunday, and I’ll be live-blogging the event right here on MoveVine. I plan to update during commercials, but if you want minute-by-minute updates and reactions you can follow me on Twitter. In the meantime, here are my final predictions for who will win this weekend. Keep in mind these aren’t my personal picks, but rather predictions based on following the award season closely. If you win your Oscar pool with this info I expect a cut. If you lose, I apologize profusely.

BET ON: Jean Dujardin has been campaigning hard for the gold, and his closest competitor George Clooney may swipe it out from under him, but I highly doubt it.

BET ON: Christopher Plummer. He’s long over-due for the Oscar, and 2012 is his year.

BET ON: Viola Davis has got this in the bag. She’s won every major award up to this point, not even the Almighty could spur an upset.

BET ON: Octavia Spencer will be the other big Help winner of the night. The crowds love her and she has the best moment in the film.

BET ON: Rango is the frontrunner in a pretty weak field. But then again, this has been a pretty weak year for animation fans. Panda 2 and Puss in Boots both have fans, but they’ll split the vote letting Rango come out the victor.

BET ON: This is where Hugo will start gathering technical awards that act as consolation prizes for missing out on Best Picture.

BET ON: I’m split on picking between Tree of Life and Dragon Tattoo, but considering the Academy’s demographic (older, whiter, maler) I’m leaning towards Dragon Tattoo for the win. The film is very popular with that crowd, so it’ll get some recognition here.

BET ON: Usually it’s wise to pick the feature with the oldest time period and call it a day, but this year it’s a hard field. I’m going with Jane Eyre, but if I admit one weak spot in my picking abilities, it’s this one.

BET ON: It pains me to see Scorsese passed over again, but my money’s on Michel Hazanavicius this year. All his competitors have solid support, so the vote will split and he’ll win by default. The same thing happened last year with Tom Hooper.

BET ON: This is where Moneyball will get some (well deserved) love. It has the stand out sport sequences and the tonal shifts going for it. The Artist might sneak by if the Academy really loves it, but I doubt it. Moneyball has a lot of fans, and most point to the editing as a major achievement.

BET ON: A Seperation barely missed out on getting into the Best Picture race. It is a definite lock for this category.

BET ON: Some say Albert Nobbs is a lock, but I’m leaning toward The Iron Lady. The Academy will want to recognize the political bio-pic somehow, and this is the only slot where a win doesn’t raise too many eyebrows.

BET ON: John Williams’ double nominations will split against him, so he’s out. Ludovic Bource’s work in The Artist is certainly commendable, and less thoughtful folk will argue that the film relies so thoroughly on the score that the Academy has no choice but to give Bource the gold. The Academy isn’t a very thoughtful lot, so I’m picking The Artist to win.

BET ON: There is no way on earth the Academy is recognizing Rio for anything. Man Or Muppet has got this locked.

BET ON: The sound categories are always tricky for me. But they’re tricky for most Academy members as well, so looking at the films nominated in both categories narrows it down a bit. Choosing between Hugo, Dragon Tattoo, or Transformers, the average Academy member is going to lean towards Hugo. Remember the consolation prizes I mentioned?

BET ON: Hugo. See above.

BET ON: Rise of the Planet of the Apes will get the prize, and deservedly so. The Academy isn’t comfortable giving Andy Serkis an award for his motion capture work, so this will have to suffice.

BET ON: This is where The Descendants will get their token Oscar love. Moneyball might sneak in, but if the baseball flick gets the editing trophy the Academy will spread the love and toss Descendants this bone.

BET ON: Woody Allen won’t show up to accept his Oscar on Sunday, but expect to hear Midnight in Paris announced as the victor all the same.

BET ON: The Artist, all the way. It has won everything leading up to this with no sign of slowing down. If this flick doesn’t win, I’ll eat my hat. 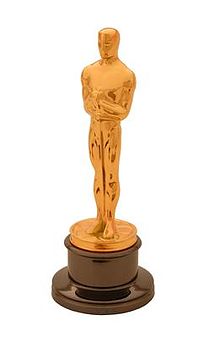 And there we have it. I’m abstaining from making predictions for Documentaries and Short categories, so you’re on your own with those. Good luck to all those placing their bets, and I’ll see you all back here at MovieVine during the ceremony.

The 84th Academy Awards will be hosted by Billy Crystal and airs at 8pm EST on ABC.